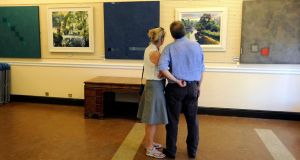 Some €300,000 was raised by last night’s fire sale of the art that used to adorn the walls of Anglo Irish Bank premises.

Although the auction generated more than twice the anticipated amount, another such event would need to be held every day for the next 228 years in order to clear Anglo’s €25 billion debt to the nation.

The sale, carried out at the request of the more recently named Irish Bank Resolution Corporation’s liquidators KPMG, was never likely to raise too much money, with one art expert telling The Irish Times yesterday that while there were some “quite good” contemporary pieces, there was “some awful rubbish in there too”.

Much of the art came from the bank’s regional offices and would have been bought by bank officials more interested in being seen to support local artists than investing in quality works of art.

About 100 people had packed into the room on the first floor of the Adam’s auction house on St Stephen’s Green by the time auctioneer James O’Halloran started proceedings just after 6pm. From the off, sales were brisk, with most of the 134 lots being dispensed with in under a minute and for less than €1,000.

There were, however, a few gems to be found. Among the highlights were watercolours by Pauline Bewick depicting Irish wildlife, while work from Louis le Brocquy, Martin Gale, Felim Egan and Stephen McKenna also attracted much interest.

A further 18 pieces, worth an estimated €160,000, as well as the infamous Anglo sign which hung over its Dublin headquarters, have already been donated to the Irish Museum of Modern Art.