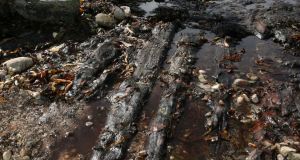 Remains of an oak trackway, estimated to be between 3,500 and 4,500 years old, on the shore near Furbo, Co Galway. Photograph: Joe O’Shaughnessy 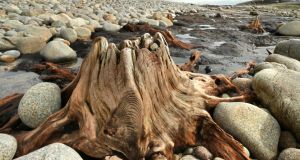 Fragments of an oak trackway suggesting human habitation have been found within the 7,500-year-old “drowned forest” on the north Galway shoreline.

The track could be between 3,500 and 4,500 years old, and may have been built when the sea level was rising and was gradually enveloping the forest that pre-dated Galway Bay.

NUI Galway (NUIG) geologist Prof Mike Williams, who has researched the “drowned forest”, comprising a layer of peat and tree stumps uncovered by the winter storms, examined the trackway or “togher” this week.

He was alerted to it by a Spiddal resident, Alan Keogh, who discovered it when walking on the south-east Connemara shore.

Mr Keogh said that he had heard about the drowned forest, recently reported in this newspaper, and recognised the significance of what appeared to be a “symmetrical structure” below a line of peat, about 1.5m by 1m.

“Together with the Bearna canoe, this is the first evidence of human habitation within these forests and lagoons in this area,” said Prof Williams.

This would make it older than the Corlea “togher”, the Iron Age track across the boglands of Longford, close to the River Shannon.

The Corlea oak road, which was excavated by Prof Barry Raftery of University College Dublin, is the largest of its kind to have been uncovered in Europe.

Prof Williams is awaiting further archaeological examination of the section, which has a north-west orientation and is on a storm beach near Furbo, looking south to the Burren and Black Head.

The Bearna canoe was found on the shore near Bearna by Brian and Rónán Ó Carra in December 2002, and is preserved in the Galway Atlantaquaria in Salthill.

The canoe was found to be 4,740 years old when radiocarbon-dated and Mr Ó Carra believes the trackway may be of a similar age.

“The canoe was freshwater, and these people used them for fishing and as a form of transport – like our stand-up paddle-boards,” he said.

Mr Ó Carra recently found the skull of a red deer in the same area and this is being examined by the National Museum of Ireland.

The New-Year hurricane-force winds and sea swell stripped away layers of sand and stone on the shoreline. This revealed the peat and stump remains of the lagoon and a woodland landscape that had been populated by bears, people and wolves.

The stumps visible around Spiddal are in their original growth position, which would suggest they died quite quickly, Prof Williams says.

Ireland experienced a series of sea-level rises up to 5,000 years ago.

Prof Williams says the fragile habitats may be covered again within months, as the Atlantic replenishes the shore with stone and sand.