Adrian Ismay: Postmortem to decide if death treated as murder 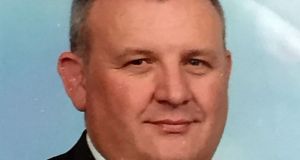 Adrian Ismay: “He was greatly respected by all those who knew him,” said Stormont’s Minister for Justice David Ford and Northern Ireland Prison Service director general Sue McAllister. Photograph: Department of Justice/PA Wire

A postmortem will be carried out on Wednesday on the remains of a prisoner officer injured in a dissident republican bomb attack in Belfast this month. Police will then decide if his death can be treated as murder.

Adrian Ismay (52), from the east of the city, was rushed to hospital in Belfast on Tuesday but subsequently died. It is believed he suffered a heart attack. Mr Ismay was remembered last night as a “proper gentleman” and community volunteer who would “help anyone regardless of creed or caste”.

He had been recovering at home after undergoing surgery on serious injuries sustained when a device partially detonated under the van he was driving over a speed ramp in Hillsborough Drive on March 4th at 7.10am.

At the time of the attack, it is understood the married father of three grown-up daughters had been on his way to work at Hydebank Wood Young Offenders Centre where he trained staff based at Maghaberry top-security prison.

The New IRA claimed responsibility for the bomb at the time and linked it to a dispute between the prison authorities at Maghaberry and dissident republican inmates.

Finlay Spratt, chairman of the Prison Officers’ Association in Northern Ireland, described Mr Ismay as a “proper gentleman who carried out a lot of work on behalf of the community”.

Following the attack on Mr Ismay, PSNI assistant chief constable Stephen Martin warned that dissident republicans wanted to mark the centenary of the Easter Rising by “killing police officers, prison officers or soldiers”, and described the threat level as being at the “upper end of severe”.

Mr Spratt was clear that, regardless of the circumstances of Mr Ismay’s passing, “those people who planted that bomb are responsible for his death”.

The chairman of the Police Federation for Northern Ireland, Mark Lindsay, said: “A man’s life is lost for a futile cause, and a whole family is plunged into grief.”

He appealed for anyone with information about two cars seized as part of the bomb investigation. A red Citroen C3, registration SKZ6662, was believed to have been used by those planting the device at 21 Hillsborough Drive at 2.20am on March 4th, and a silver Skoda Fabia, registration KFZ2352, is suspected of being used before and after the attack.

Police are hoping someone can identify a man who was dropped off by the driver of this car in Pilot Street in the docks area of Belfast at 3am on March 4th.

In a joint statement, Stormont’s Minister for Justice David Ford and Northern Ireland Prison Service director general Sue McAllister said: “Adrian Ismay gave over 28 years of service to prisons in Northern Ireland, and he was greatly respected by all those who knew him.”

First Minister and DUP leader Arlene Foster and Deputy First Minister Martin McGuinness, who are in the US, said while they were both far from home “foremost in our thoughts are a grieving family”.