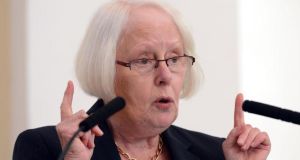 Ms Justice Mary Laffoy struck out the proceedings after the man’s barrister said he was dropping his application in light of an affidavit from his girlfriend. Photograph: Alan Betson

Anti-abortion groups have said they are willing to pay the legal bills of a man who yesterday withdrew his application for an injunction to prevent his girlfriend travelling to the UK for an abortion.

It is understood the woman intends to continue with her pregnancy.

The man had sought the injunction because he believed the woman was being forced by her parents to undergo the procedure.

In the High Court yesterday, however, Ms Justice Mary Laffoy struck out the proceedings after the man’s barrister said he was dropping his application in light of an affidavit from his girlfriend. The man felt he could “place his faith” in statements made in the affidavit, he said.

The couple, who are foreign nationals living in Ireland but cannot be identified for legal reasons, hugged outside the courtroom when the case was withdrawn. The court action was initiated earlier this week after the man apparently discovered arrangements had been made for his girlfriend to have an abortion in the UK.

He claimed he had no desire to prevent her from travelling should that be her freely-held wish but he believed she was being forced to undergo the procedure by her family.

Family interference
The man’s lawyer told the court the couple, who are in their 20s, had known each other for a year but that the woman’s family had not accepted their relationship.

The man claimed his girlfriend’s family was unhappy that she was involved with someone of non-European origin. In an affidavit to the court, he said she was “happy to be pregnant” and had “never expressed any desire to have an abortion”.

The case was adjourned on Wednesday for the woman to receive legal advice. When it resumed yesterday, the man’s barrister, Séamus Ó Tuathail, said his client wanted to withdraw the application.

“As shown in the (woman’s) affidavit, matters will continue as of present in relation to the pregnancy,” he said.

“I hope things work out for both parties,” Ms Justice Laffoy said as she struck out the case. She also thanked the Attorney General for observing proceedings. “It’s a very emotive matter and I was afraid I would need objective assistance,” she added.

Affidavit
The full contents of the woman’s affidavit were not revealed.

After the brief hearing, the couple spoke with two anti-abortion activists who had supported the application. Representatives of two groups, the Society for the Protection of Unborn Children (Spuc) and Precious Life, told reporters they had supported the case and were willing to cover any legal bills.

Bernadette Smyth of Belfast-based Precious Life claimed the man had made contact with the group’s counselling service through the Citizens Advice Bureau in Northern Ireland. “They were very happy in their relationship,” said Ms Smyth, who handed the woman rosary beads outside the courtroom.

“They were both very happy with the pregnancy; there were no issues there. The couple were not planning to abort the baby. . . It was important the decision they had both made was protected.”

Ms Smyth said her group’s service informed women of the consequences of having an abortion. “Life is precious and we in society should always be providing support to any woman, any parent, who would face a crisis pregnancy,” she said. “There is always a better way. Women deserve better than abortion.”

Liam Gibson of Spuc said the man in the case felt a High Court action was “the only option” open to him.

“If women are not fully choosing abortion, either through financial pressures or through external pressures of other kinds, very often (they) regret the decision very very quickly,” he said.

Mr Gibson confirmed the couple’s legal fees would be paid if needed, but it had not been necessary to date.” Costs are a secondary issue. The life of a child and the safety of the mother is of paramount importance,” he said.