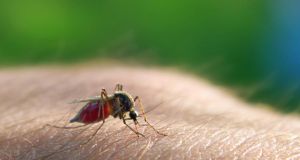 Andrew Bryce claimed he took Lariam prior to his honeymoon in Kenya in 1996. The drug is used to prevent malaria, which is spread by mosquitoes. File photograph: Getty Images

A legal action by a former company director over alleged side-effects of an anti-malaria drug, mefloquine, which is sold under the brand name Lariam, has been “compromised” on confidential terms, the High Court has been told.

The president of the High Court agreed to make orders on consent in line with the terms of a confidential agreement handed into court.

No details of those orders or the agreement were disclosed.

That agreement relates to the full action by Andrew Bryce and to applications by all the defendants to dismiss it, the judge was told.

In proceedings initiated in 1999, Mr Bryce sued Roche Products (Ireland) Ltd; a medical doctor and Executive Medical Care Ltd, trading as Grafton Street Medical Centre, for damages for allegedly failing to warn him of all of the side-effects of the drug.

All the defendants had denied the claims and all had motions before the court on Tuesday seeking to have the action dismissed either for want of prosecution or inordinate and inexcusable delay in prosecuting it.

Mr Bryce claimed his delay in prosecuting his action was allegedly due to poor health since having taken the drug.

Mr Bryce had claimed he took Lariam prior to his honeymoon in Kenya in 1996.

He claimed he suffered panic attacks and dizziness and his health had deteriorated after returning from his honeymoon.