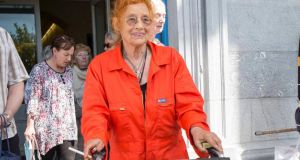 Galway anti-war activist Margaretta D’Arcy has had a three-month suspended sentence activated after she refused to sign a bond to uphold the law and keep away from unauthorised zones at Shannon. Photograph: Eamon Ward

A 79-year old feminist, peace activist, film-maker and member of Aosdána has been jailed for three months in Limerick Prison in relation to protests over US military use of Shannon Airport.

Margaretta D’Arcy, who is undergoing cancer treatment, was arrested at her Galway home yesterday morning after she refused to sign a bond to uphold the law and keep away from unauthorised zones at Shannon.

Ms D’Arcy and Niall Farrell (60) of Oranmore, Co Galway, were given three-month suspended sentences by Judge Patrick Durcan at Ennis District Court last December for illegal incursion of the runway at Shannon Airport on October 7th, 2012.

The sentence was activated for Ms D’Arcy when she declined to sign the bond. Her son Fin Arden told The Irish Times that he had spoken to his mother by phone after her arrest at 10am yesterday.

Shannonwatch spokesman John Lannon said it was a “travesty of justice when the peace activists end up in prison, while there is no investigation of war criminals using the airport”.

“While protesters at Shannon have been arrested before, and have been before the courts, all have been acquitted to date,” he pointed out.

An activist
Ms D’Arcy, who was married to the late playwright John Arden, has been an activist since joining the anti-nuclear Committee of 100 led by Bertrand Russell in 1961.

She was a member of the Greenham Common Women’s Peace Camp, and spent time in Northern Ireland’s H-block in the early 1980s.

President Michael D Higgins referred to his close friendship with the couple when he spoke at Arden’s funeral at Mount Jerome crematorium in April, 2012.

Mr Farrell, spokesman for the Galway Alliance Against War, said that discontinued use of Shannon by the US military was part of the programme for government, and Ms D’Arcy’s arrest for trying to highlight the issue was an “absolute scandal”.

He called on Mr Higgins to visit Ms D’Arcy in prison.

Ms D’Arcy and Mr Farrell are both due at Ennis District Court next Wednesday following a separate arrest at Shannon on September 1st, 2013.