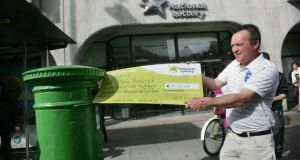 Lottery postman Pat Broderick from Kinsale celebrating his lotto win of over €7 million in 2011. Under the new licensing arrangements, the lottery business is expected to make the next operator between €18 million – €20 million a year after prize payouts, good causes and costs

The awarding of the State’s lottery licence to An Post and UK operator Camelot marks the end of a two-year process to effectively privatise the 26-year-old franchise.

Whether the new arrangements, involving a big international player, will see the business grow by the anticipated level remains to be seen.

However, the €405 million price tag was more than many analysts predicted the Government would make, and marks a pretty positive start to the new era.

Since its inception in 1987, the National Lottery has been a steady cash cow for Government, generating just over €4 billion in revenue for good causes.While sales of tickets and scratch cards have fallen during the recession, the downturn has been less dramatic than in other areas of retail.

By front-loading lottery-generated cash through the selling of an extended 20-year licence, Minister for Public Expenditure Brendan Howlin is essentially tapping into future earnings at a time of unparalleled fiscal constraint.

He has been clever to counter public unease about the process by linking the sale to the building of a vital piece of state infrastructure, namely the proposed National Children’s Hospital in Dublin. Some €200 million of the proceeds have already been earmarked for the project.

“We have to be innovative and creative in how we raise funds; by seeking an upfront payment for the lottery licence we can provide part-funding for the new national childrens’ hospital without having to source that level of cash by reducing expenditure in other areas or raising additional taxes,” Mr Howlin said, when announcing the start of the competition.

Under the new licensing arrangements, the business is expected to make the next operator between €18 million – €20 million a year after prize payouts, good causes and costs, which include a fixed retailers’ commission.

The Government eschewed the option of offering a longer licence term, or as one observer put it, adopting “a naked grab the cash and screw the consequences” approach.

Instead it made a strategic choice to offer a shorter licence, structured around a fixed income for good causes, while incentivising the operator to grow the business.

Under the terms of the licence the annual contribution to good causes will be set at
65 per cent of gross gaming revenues, which discounts the cost of prize payouts.

While this represents, at least on paper, a smaller portion of the overall pie, Mr Howlin is confident the licence provides the next operator with an opportunity to grow the business, especially the digital side, which will result in more money for good causes. The National Lottery has, up until now, been restricted in the way it operates online, obliging players to go through a cumbersome registration process. This involves the submission of a passport number or driver’s licence to activate accounts, which can take up to 48 hours. Most online players never complete the process, according the lottery’s surveys.

Under the new Lottery Act, these strict rules, which were devised in a pre-internet era, have been relaxed to help grow the business online.

The Minister believes the next operator will be in a position to grow annual money for good causes from the current figures of €225 million to €300 million in five years, under the licensing terms.

An Post’s business partner, Camelot, boasts the biggest internet platform in Europe, with 15-17 per cent of the UK business now coming from online sales, a potential which the Government is keen to exploit here.

Camelot has been eying the business for a number of years, and is known to see it as perfect match to its existing operations, which include Northern Ireland.

Winning the Irish business is seen a big prize, with the Irish per capita spend on lottery tickets the fourth-highest in Europe.

The decision by An Post to jilt its long-standing technology partner Gtech for Camelot provided the only real surprise of the process.

Gtech had won three out of the last four big US state contracts, and had been the favourite to take the Irish licence before An Post and Camelot teamed up.

The bidding is also thought to have involved Australian gaming group Tatts, which owns or runs lottery licences in every Australian state and territory except for Western Australia, but the company has not commented on its involvement.

A big question still relates to what sort of stick the Government can wield if the new team underperforms. By eliciting a large upfront payment, Howlin will say he has sufficiently incentivised the next operator not to fail.