€38m Eircode system will prove to be value for money, Minister says 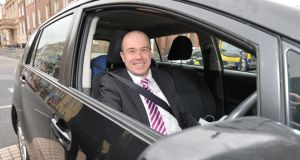 The €38 million Eircode system should be given time to bed in and will ultimately prove to be value for the money invested, Minister for Communications Denis Naughten has said. Photograph: Alan Betson / The Irish Times.

The €38 million Eircode system should be given time to bed in and will ultimately prove to be value for the money invested, Minister for Communications Denis Naughten has said.

Speaking a year on from the introduction of the post code system, Mr Naughten said it could take up to five years for Eircode to be fully implemented and that similar criticisms were made when PPS numbers were first introduced.

An Post says it has no information available at this stage on the system’s uptake by customers. The Minister said he was surprised An Post had not produced figures on the use of the service over the past year.

Mr Naughten told RTÉ’s Morning Ireland the system had proven to be invaluable in directing emergency services in rural areas and is used by a range of Government departments as well as in the commercial sector. He said he expected Eircodes to go on the Register of Electors later this year.

“We’re at a situation at the moment, it’s 12 months in operation. It’s like a small baby who has started to crawl and people are asking why isn’t the baby running?

“Significant progress has been made not just in relation to the emergency services, the gardaí are using it in relation to firearms so they know exactly in which premises these firearms are.”

Mr Naughten said negotiations were ongoing with Sat Nav companies and Eircode would soon be used by TomTom navigation. He added that talks were at an advanced stage with Google Maps.

“Once it starts to go into some of this software and the public starts to use it on a day to day basis, I think there will be far greater acceptance.”

Neil McDonnell, from the Freight Transport Association, alleged on RTÉ’s Today with Seán O’Rourke that Capita Ireland, which created Eircode, had subsequently lost faith in it and developed two other systems.

He cited a recent survey of freight and supermarket companies which found 96 per cent do not use Eircode. However, the Department of Communications said there is no analysis yet on the first year of operation of Eircode.

Mr McDonnell said he discovered through a Freedom of Information request that An Post had requested a random post code format.

“An Post did not want the type of post code recommended by the National Postcode project group which had been set up two governments ago,” he said.

“They said it would take too long to introduce, but that they could support a random support code immediately. We can only speculate why they would support a post code that none of their competitors could use.”

Liam Duggan, an Eircode director, defended the €38 million system and said it took the UK 30 years to fully accept and integrate its post code system.

Mr McDonnell said the 30-year integration process in the UK was “pre-technology” and that his members were in favour of the introduction of a post code before they discovered the format now being used.

“You now have a world just waiting to use a functioning post code - all these delivery companies waiting for a system that they can just plug in and use in existing systems.”

In a report last year the Comptroller and Auditor General (C&AG) Seamus McCarthy said it was not clear if the expected benefits from the Eircode system will be achieved.