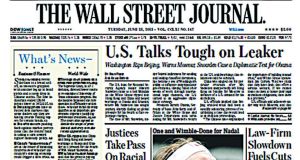 According to the Wall Street Journal, the Government is “determined” to unleash an inquiry in the wake of the latest revelations.

International reaction to the Anglo tapes scandal was mounting yesterday with media outlets pointing to an Irish government “suckered” or “hoodwinked” by a bank whose actions must now surely be the subject of inquiry.

Where next for the State and its efforts to come to terms with the damage inflicted by a five-year-old financial crisis, was the basic tenet espoused by publications the world over.

According to the Wall Street Journal, the Government is “determined” to unleash an inquiry in the wake of the latest revelations. Business Insider’s headline declared: “Busted: Bankers Caught on Tape”, labelling the situation embarrassing and “pretty scandalous”.

In the Daily Telegraph, details discussed by the Anglo executives show how they “suckered the Irish government into a €7 billion bailout knowing that far more was needed”.

“Speaking to Peter Fitzgerald, Anglo’s former head of retail banking, Mr Bowe appears to describe how the bank cynically lured the government into a €7 billion rescue in full knowledge that the sum would be nowhere near enough to save the lender,” the newspaper reported yesterday.

In its coverage, the BBC noted that just when it seemed nothing could shock us, the Anglo tapes have done exactly that. “Very few people in the Republic of Ireland doubted that the banks were less than honest in their dealings with both the Irish Central Bank and the government,” the broadcaster opined. “But to hear how apparently blatantly dishonest they were has shocked many. Sometimes it is not just what is said, it is the tone that matters.

“It now seems inevitable that nearly five years after the bank guarantee, now widely regarded as disastrous and which has cost the Irish taxpayer so dearly, some form of public investigation will follow.”

Those reflections on the cause for a seemingly inevitable inquiry followed from other outlets too.

The Financial Times’s stance was self-evident with its piece entitled: “Ireland should lift lid on bank crisis with an inquiry”.

“In the calculation of blame for financial bad behaviour, a throwaway comment can weigh as heavily as a slew of statistics,” it pointed out. “An example is the quip of an Anglo Irish Bank executive that the sum of €7 billion in aid demanded from Ireland’s central bank was ‘picked out of my arse’.”