‘Highly likely’ Halappanavar would be alive if termination given, inquest told 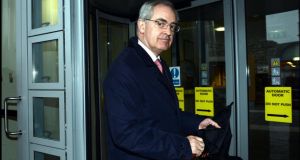 Savita Halappanavar would probably be alive today if she had been given a termination of her pregnancy when she requested it, the former master of the National Maternity Hospital has told her inquest.

Dr Peter Boylan said that if Ms Halappanavar had been given a termination on the Monday or Tuesday, one or two days after she was admitted last October 21st, she would “on the balance of probabilities”, still be alive.

"It is highly likely she would not have died" if she had been given a termination earlier, he added.

However, terminating her pregnancy was not a practical proposition for the doctors treating her at this time because of the legal situation in Ireland, he said.

Ms Halappanaver’s husband Praveen told the inquest last week he and his wife requested a termination three times over these two days. At the time, she was miscarrying at 17 weeks but the foetal heartbeat was still present.

This situation was reached on Wednesday morning October 24th, he said, when she developed severe sepsis and there was a real and substantial risk to her life.

Dr Boylan said there were a number of deficiencies in the care provided to Ms Halappanavar, including the failure to note and review her initial – abonormal – white cell count and a conflict of evidence between a midwife and doctor who treated her early on the Wednesday morning.

He said University Hospital Galway’s guidelines on sepsis were “not particularly helpful”. The particular antibiotics administered to Ms Halappanavar early on the Wednesday could also be regarded as deficient but were in line with international recommendations, he said.

The real problem was the inability of doctors to terminate her pregnancy at an earlier stage, Dr Boylan said. By the time her condition worsened and this became possible, it was too late to save her life.

Dr Boylan said obstetricians were working in a legal "vacuum" as to when a mother's risk of dying was high enough for them to be legally allowed to terminate a pregnancy. Under cross examination he told Eugene Gleeson, SC for Ms Halappanavar’s husband Praveen, that the legal position was that there had to be a "real and substantial" risk to the life of the mother, but that there were no guidelines on what constituted the real and substantial risk.

"That's the current position. There are no guidelines. Doctors are working in a legal vacuum. Unlesss woman looks like she is going to die...we are on very sticky ground." He said the penalties faced by doctors if there were to calculate the risk incorrectly meant they could face penalties "not pleasant for us to contemplate getting involved ."

Mr Gleeson referred to the Medical Council guidelines which state: "In current obstetrical practice, rare complications can arise where therapeutic intervention (including termination of a pregnancy) is required at a stage when, due to extreme immaturity of the baby, there may be little or no hope of the baby surviving. In these exceptional circumstances, it may be necessary to intervene to terminate the pregnancy to protect the life of the mother, while making every effort to preserve the life of the baby."

Mr Gleeson asked Dr Boylan whether the risk posed by severe sepsis satisfied this standard. Dr Boylan said the standard had not been reached, according to Ms Halappanavar's medical notes, until 6.30 am on Wednesday 24 th.

Asked whether it was reasonable to wait until there had been a 51 per cent risk of death, as had been suggested by counsel for Dr Katherine Astbury at the inquest last week, Dr Boylan said medicine was "not like that".

He said in his opinion a risk of 20 per cent to 40 per cent risk of death was sufficiently "real and substantial" for a doctor to terminate a pregnancy. "I wouldn't agree with 51 per cent".

He said doctors from abroad working here could not understand the restrictive law on abortion here. "But we have to work within the law," he said. "Had intervention occurred on 22nd or 23rd , Savita would be with us?," asked Mr Gleeson. "Yes," said Dr Boylan

Speaking on his way into the inquest,Praveen Halappanavar said he was “optimistic” but looking forward to the end of it.

The inquest heard first from two witnesses, recalled by coroner Dr Ciaran Mac Loughlin - Dr Ikechukwu Uzockwu and midwife Ann Maria Burke - in an effort to resolve a disparity in their testimonies from last week.

Ms Burke said this morning she had called Dr Uzockwu at 7.35 pm on the night of Tuesday 23rd October to tell him Ms Halappanavar’s pulse was elevated. Dr Uzocwu, senior house officer on duty that night, said last week he was told in a phone call between 9pm and 11pm her vital signs were “stable”. He said had he known of her elevated pulse he would have come immediately to review her condition.

She said this morning she was “one hundred per cent certain” she had told Dr Uzockwu of the elevated pulse. She said the pulse had been taken by a student nurse Elaine Finucane at 7.15pm and it was found to be 114 beats per minute and that she was so alarmed she asked her to recheck it.

“On the recheck it was 110. I was concerned and that is why I spoke to the doctor and told the doctor,” said Ms Burke.

Dr Uzockwu said this morning he stood by his testimony from last week. He said he was on the ward at 1 am on Wednesday 24th October and did not examine Ms Halappanavar then as she was asleep. At 6 am he examined her and diagnosed an infection of Ms Halappananvar’s foetal membranes.

He said he could “only go by what was told” and that he was told they were normal.