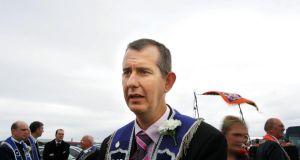 When Ruth Bowie, Arlette Lyons, Jenny McDonald and Amanda Mellet spoke last year to The Irish Times about the circumstances that had led them to travel outside the jurisdiction to have their wanted pregnancies terminated, public reaction was overwhelmingly positive. Even anti-choice individuals and organisations evinced sympathy and good will towards the women.

They didn’t get off so lightly up here, where the anti-choice outfit Precious Life had the press statement out quicker than you could say “ensoulment”, telling them that they had started down “the slippery slope to the Nazi Holocaust”.

It’s possible none of the women is aware they were stigmatised as harbingers of Hitlerism. Stories from the North which don’t have to do with Orange-Green politics find it hard to elbow their way onto the agenda.

Last May, Deirdre Conroy waived her anonymity to reveal that she was the woman in the D case: pregnant with twins, one of which had died in the womb and the other diagnosed as suffering from a fatal abnormality, she had had to travel to the North in 2002 for an abortion after being told in the South that as there was nothing that could be done for her she should to “go home and sort it out”.

“I found on our own island there was a place where compassion and sympathy and tolerance prevailed,” she said.

It is wonderful that this was the attitude she encountered. But it is not at all certain she would be given a termination were she to present herself to a Northern hospital today.

It took the political system in the Republic 20 years of evasion and prevarication before a legislative response to the X case judgment was forthcoming. The new measure may be a woeful, whimpering thing. But at least a relevant law has emerged. Consider the Northern contrast, where pro-choice activists are merely urging that guidelines be issued so that medical practitioners and women with problematic pregnancies know where they stand under existing law.

Twelve years ago, the NI Family Planning Association (FPA) asked the High Court to instruct the Stormont Department of Health to define the circumstances for legal abortion. The case has since been travelling a long and winding road, the end of which may – or then again may not – be coming into view.

The current law in the North is the law which applied in Britain prior to the 1967 Act. On a number of occasions in the 1990s, the High Court set out the duties and entitlements of women and doctors under the law.

In the K case in 1993, the court ruled that a pregnant 14-year-old who was threatening to abort herself or commit suicide was entitled to a termination.

In 1994, the court ruled that A, a severely mentally disabled woman, had a right to an abortion.

In 1995, the court declared that a 16-year-old with mental health problems who was in the care of the state was entitled to a termination.

In none of these cases was the woman or girl able to avail in the North of the service which the court had explicitly declared was her legal entitlement. Each had to travel to England. Nothing was done to remedy this situation until the FPA’s intervention in 2001, at which point nothing was done again.

In 1992, the FPA went back to court. The Department of Health promised to produce guidelines. Six years passed. Guidelines were produced – and rejected by the Assembly as too liberal. Redrafted guidelines appeared in 2008, were then withdrawn for revision. A “final” version was published in March 2009. In May 2010, the Society for the Protection of the Unborn Child challenged this draft. In June 2010, the department produced a rewrite and announced a public consultation on its terms to end in October the same year.

In September 2011, asked when the Assembly might get sight of the results of the consultation, health minister Edwin Poots replied: “As yet, no date has been set.”

Come January last, still no guidelines. The FPA went back to court. In February, the case was halted when Mr Poots announced that guidelines would be published by March 7th. They were published in April, and put out for consultation. The consultation period ends on the 29th of this month.

The published draft makes no allowance for abortion for reasons of fatal foetal abnormality. Ms Conroy would be told in the North today to go away and sort it out herself. For compassion, sympathy and tolerance she should have to go to England.

Where the battle moves next is hard to say. Pro-choice organisations can be expected to fight on.

Throughout all these years of fiddle and fudge, the legal position has remained as defined 20 years ago in K. An average of five women from the North still trudge to England for abortions every day.

A co-ordinated push for abortion rights across the island may be an appropriate way forward.