Why has Ireland lost so many doctors and nurses? 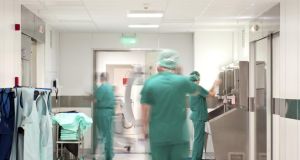 The recruitment embargo introduced by the HSE in 2009 meant there were no staff jobs in the health service for the 1,500 nurses and 727 doctors graduating each year. File photograph: Getty Images/iStockphoto

The recruitment embargo introduced by the HSE in 2009 meant there were absolutely no staff jobs in the health service for the 1,500 nurses and 727 doctors graduating each year.

This coincided with aggressive overseas recruitment campaigns by health services in Australia and the UK, which were experiencing acute shortages of healthcare staff.

The Nursing and Midwifery Board of Ireland has received almost 10,000 applications since the beginning of 2010 for Certificates of Current Professional Status, which are necessary for Irish-registered nurses and midwives who want to work abroad. The UK has been the most popular destination, with 4,270 applications, followed by Australia with 3,594. A total of 1,214 nurses applied to go to Australia in 2011 alone.

This year, the United Arab Emirates has been particularly popular, with 53 applications to go there since January. This largely reflects the targeted recruitment of Irish nurses to work in the Cleveland Clinic, a private hospital which opened in Abu Dhabi in March.

About a quarter of the stands at the popular Working Abroad fairs across the country in the past few years were taken by overseas healthcare employers.

Australia has predicted a shortage of 110,000 nurses and 2,700 doctors by 2025, and Ireland has been designated one of five “competent authority” countries, where qualifications are recognised by the medical board as comparable with Australian standards.

As a result, public and private healthcare providers have been targeting Irish doctors and nurses, sending delegations to recruit at Irish fairs.

In the 12 months to June 2014, 527 Irish “healthcare and social assistance workers” moved to Australia under the employer-sponsored 457-visa scheme, bringing the number for the last eight years to 4,052.

The salaries in Australia are an incentive. Newly qualified nurses and midwives in New South Wales start on nearly $58,000 (€36,000) a year. In Ireland, a staff nurse on the first level of pay earns €27,211.

While some experience or a speciality is needed to work in Australia, the US, Canada and New Zealand, especially for nurses, the National Health Service (NHS) in the UK has been so desperate for staff in all areas they have been willing to take new graduates, offering them rotational positions with attractive opportunities for postgraduate training.

Ireland has consistently been one of the NHS’s top five source countries for nursing recruitment since 2009.

Last year, 322 Irish nurses joined the register to work in the UK. It has also been a popular destination for Irish GPs, with more than 1,000 travelling across the Irish Sea between 2009 and 2013, a staggering figure, given that Ireland only trains 157 GPs a year.

In the past year, the NHS introduced more incentives, including sign-on bonuses, free car parking, free uniforms and meals.

While salaries are broadly similar between the HSE and NHS, take-home pay is higher because the UK doesn’t have the universal social charge.

But a study in May found young Irish doctors and nurses are not choosing to go abroad only for financial reasons, but because of poor working conditions, training and career opportunities here.

The survey of more than 500 junior doctors and nurses, by the Royal College of Surgeons in Ireland (RCSI), reported a feeling of “general disrespect” for health professionals in Ireland from the media and HSE.

Many said they had “rediscovered the joy” of practising their profession in Australia, the UK and US.

“In these countries, they are welcomed; applauded for their work,” says Dr Ray Walley, president of the Irish Medical Organisation (IMO), who is a GP in Dublin’s north inner city.

“Doctors in Ireland can’t use their training and skillset. You have to surrender your professional values to stay in this country.

Will they come back? The recruitment embargo is over and the HSE is hiring again, but the health service could have a difficult job attracting Irish doctors and nurses back to Ireland.

While many of the participants in the RCSI survey indicated a desire to return to live in Ireland, they said the health service would have to reform to improve staffing levels and offer packages comparable to those in other countries .

The HSE announced a new three-month recruitment campaign in July aiming to attract 500 nurses and midwives working abroad, particularly in the UK.

The package includes a tax-free sum of €1,500 to cover relocation. By the end of last week, 320 applications had been received and 10 people hired, with a further 20 selected candidates expected to start in the coming weeks, pending Garda clearance.

Home is still an attraction for many of them, particularly when permanent posts are available for the first time in years.

But general secretary of the Irish Nurses and Midwives Organisation Liam Doran, who estimates that more than 4,000 nurses will need to be hired to return the Irish nursing workforce to pre-crash levels of 39,000, says what is being offered might not be enough.

“While the recruitment campaign is welcome, it is not being incentivised to the extent necessary. Our fear is that it won’t attract the quantum of nurses needed,” he says.

“The NHS offers a shorter working week (37 hours as opposed to 39 in Ireland), staffing levels are better with much less overcrowding, and there are much more opportunities for training.”

And it doesn’t look like the number of doctors and nurses leaving Ireland will slow soon.

A survey of more than 2,000 students at the State’s six medical schools by NUI Galway found almost nine in 10 plan to leave or are “contemplating” leaving Ireland when they qualify.

“Just offering a permanent job in green old Erin is not going to cut it anymore,” Mr Doran says.