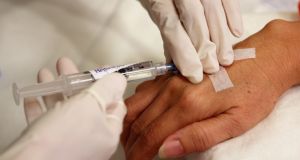 Fannin Compounding in Dublin has issued an alert after finding a machine used to manufacture the treatment was contaminated with bacteria that can cause serious gastro-intestinal infections.

About 200 cancer patients at 13 public hospitals have been offered medical appointments over concerns their chemotherapy treatment may have been contaminated.

The HSE says the move is precautionary and there is no indication “at this time” from the manufacturer of the drugs that any treatment has been affected.

Fannin Compounding in Dublin has issued an alert after finding a machine used to manufacture the treatment was contaminated with bacteria which can cause serious gastro-intestinal infections.

The HSE said it was notified this week of a precautionary recall of a number of batches of chemotherapy drugs manufactured by the company between September 29th and October 12th. “The company stated that a potential drug sterility issue was detected during routine daily tests that occur as part of their quality assurance processes.”

It was decided on a precautionary basis that those patients who received the drugs should be contacted by their treating hospitals, made aware of the situation and offered appointments to meet with their clinical teams to discuss any possible concerns, according to the HSE.

“All patients involved have now been contacted and offered an appointment. However, if in the interim, any of these patients experience any unexpected symptoms differing from what they normally experience after treatment, they are being advised to attend at or/and contact their treating hospital.”

The Health Products Regulatory Authority, which licensed the company to compound medical products at its plant in Sandyford, Co Dublin, says there is no evidence at this point to suggest an issue with any of the medicines recalled.

It says the problem was identified by Fannin when carrying out daily assessments of the manufacturing process using a test product to detect the potential presence of contamination. On October 12th, when 37 units of medicine were filled, a contamination was noted with the test product; 15 units were recovered unused during the recall.

A contaminated test product does not automatically mean that the medicines produced are affected, the authority says.The test product must be incubated for 14 days to identify any contamination and, therefore, as a precaution all units manufactured from September 29th were recalled.

“As of today (October 16th) the 14 day incubation period for the test products produced up to October 2nd has been completed successfully and no contamination has been found. This means that 132 of a total of 297 units filled over the 14 day period are not implicated. Additionally, 45 unused units have been recovered.”

The equipment used to make the products has been taken out of use while investigations continue. The company has notified oncologists it recalled the treatment last week and has since identified the source of the contamination.

The bacteria involved, bacillus cereus, is associated with food poisoning and has been found to affect people with lowered immune systems.

The letter from Fannins said investigations were ongoing to establish the source of the problem happened. Immediate corrective actions have been implemented pending the completion of an investigation, including putting the machine out of use.