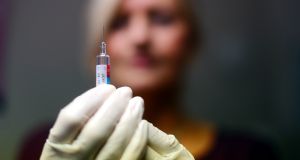 The uptake of the MMR vaccine in children aged 24 months has increased to 93 per cent. Photograph: Bryan O’Brien/The Irish Times

Some 93 per cent of children in Ireland have received the MMR vaccine by two years of age, a “marked” improvement on previous years, the HSE’s disease surveillance arm said.

The figures show that at 12 months of age 92 per cent of Irish children are appropriately vaccinated, which means they have had the recommended three doses of the 6-in-1 vaccine.

At 24 months, 96 per cent of children are appropriately vaccinated with the 6-in-1 vaccine, but the HPSC said some children were missing out on other vaccines at this age.

A 4-5 years of age, 90 per cent of children received the recommend 4-in-1 vaccine and 89 per cent received a dose of MMR.

But she said it was still important to remind parents that children needed to fully complete the childhood immunisation schedule to be protected against a range of serious vaccine preventable diseases.

“Some children, teenagers, and adults may still be vulnerable to vaccine preventable diseases because they were never vaccinated, incompletely vaccinated or have lost their immunity as a result of age or illness or duration of time that has elapsed since their immunization,” Dr Cotter said.

“For some vaccines, booster doses may be needed after a period of time to counteract waning immunity (most commonly tetanus, diphtheria, pertussis/whooping cough).”

Dr Cotter said the fact that more children in Ireland were now protected against vaccine preventable diseases than ever before reflected the confidence parents had in vaccination to prevent what used to be the most common infectious diseases of childhood.

She acknowledged the work of health professionals including GPs, practice nurses, community medicine and public health doctors and nurses in bringing this about.

Dr Cotter also said it was important to use immunisation uptake data to identify areas where there were inadequate levels of vaccination uptake, indicating an increased risk among the children to these diseases and to outbreaks.

She noted that childhood vaccines and the administration of these vaccines were free of charge to all children in the country.