US senator takes up Irish emigrants’ fight against sepsis 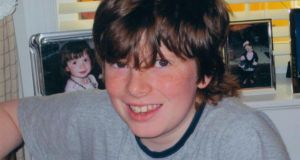 Rory Staunton died in April 2012 after scraping his arm during a basketball game. Photograph: Handout via The New York Times

An American senator used the first US national forum on sepsis organised by an Irish emigrant couple to unveil plans to make September National Sepsis Awareness Month every year and direct US government funds to educate about the dangers of the killer condition.

Democratic senator Chuck Schumer of New York told the conference hosted by Ciarán and Orlaith Staunton, who lost their 12-year-old son Rory to sepsis last year, that he and fellow senators would direct the centres for disease control to allocate money to sepsis education and prevention if the group chose not to do so on its own.

He said he would introduce a resolution in the US senate to designate September as National Sepsis Awareness Month.

Rory Staunton died in April 2012 after scraping his arm during a basketball game. Suffering from the early stages of sepsis, the condition went undetected and he was discharged by a medical clinic in the belief that he was suffering from an upset stomach and dehydration.

He died three nights after being sent home from the emergency department from severe septic shock caused by infection of toxic bacteria in his blood.

Since his death, the Stauntons have campaigned for increased public awareness and more stringent protocols in hospitals to identify the condition early and to treat the infection with antibiotics.

Senator Schumer wants protocols known as Rory’s Regulations introduced in hospitals and medical clinics in New York State to diagnose and treat sepsis quickly to be replicated across the US.

“Early detection is one of the most important factors in treating and curing the illness,” said Senator Schumer noting that US hospitals could save billions of dollars each year with new protocols to catch it. “You heard the story of Rory - nobody caught it.”

The senator asked Dr Thomas Frieden, director of the Centres for Disease Control, another speaker at the conference, to allocate more of the national public institute’s funding to raising sepsis awareness.

“There is much more that needs to happen,” Dr Frieden told the conference. “Sepsis is not nearly widely enough known.”

Ciarán and Orlaith Staunton, New York-based emigrants originally from Mayo, Kerry and Louth, were praised for raising awareness of sepsis through the Rory Staunton Foundation and their campaigning.

“You don’t have to be a genius to know that every time they tell their story it is painful,” said Senator Schumer.

“They have exponentially increased awareness of the lurking dangers of sepsis.”