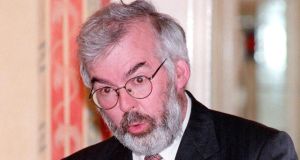 Tom Arnold: said the panel was dealing with issues “important for now and for the future”

Tom Arnold has been appointed to the Global Panel on Agriculture and Food Systems for Nutrition, an independent body tasked with combating problems relating to world food security.

Mr Arnold is the director general of the Institute of International and European Affairs (IIEA), which announced his appointment.

IIEA chairman Brendan Halligan said it was the latest in a series of roles Mr Arnold has played “at international level in relation to food and nutrition security, and is indicative of his established reputation in this field”.

Mr Arnold, an agricultural economist, “will be drawing on [his] work in climate smart agriculture and development,” Mr Halligan said.

The panel is chaired by John Kufuor, a former president of Ghana, and John Beddington, former UK chief scientist, and has 12 experts.

Mr Arnold is also chair of the Convention on the Constitution and a former chief executive of Concern Worldwide. He is chairman of the Irish Times Trust Limited and a member of the board of The Irish Times Limited.

Mr Arnold said the panel was dealing with issues “important for now and for the future”.