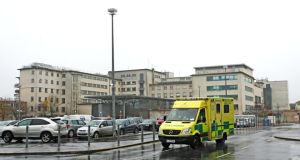 University Hospital Galway: management confirmed that lack of privacy is an issue, and that some patients have experienced “difficulties”. Photograph: Joe O’Shaughnessy.

Terminally ill patients and their families are being deprived of dignity and privacy in the emergency department of the west’s largest hospital, protesting nurses at University Hospital Galway (UHG) have said.

Such patients are being treated along corridors in “unacceptable conditions”, the Irish Nurses and Midwives Organisation (INMO) said at a lunchtime demonstration yesterday, which was supported by members of trade union Siptu.

Some 60 emergency department nurses participated in the protest, which also had the backing of various hospital staff but did not involve any disruption of service.

Hospital management had confirmed in a statement beforehand that lack of privacy is an issue, and that some patients have experienced “difficulties” attending the emergency department. It also confirmed it is providing stress management support to nursing staff.

He said that hospital management was working to resolve the issue, and respected staff’s right to protest.

“We offer our apologies as this is not the level of service we would like to provide,” he said. “Bear with us, but this will be fixed.”

INMO industrial relations officer Claire Treacy said there had been a 118 per cent increase in the number of patients coming through the emergency department at UHG in the past year.

“People are dying. It is happening in the corridors,” Ms Treacy said, and this was “devastating obviously for the family and devastating for the nurses to be forced to provide care under those circumstances”.

“We have a commitment from community services that more beds will be sourced in the community so that long- term care patients can be moved to more appropriate settings, resulting in more acute beds becoming available within the hospital,” the hospital group said.

“The nursing staff shortage in the emergency department is being addressed”.

The emergency department building needs to be updated and an application for capital funding is being made, it said.

Coronavirus: Universities plan to limit student access to campuses 01:14
Covid-19: Two-week quarantine period for arrivals into State could be lifted for some 01:07
Coronavirus: HSA says 800 workplace inspections carried out since May 18th 01:00
No temporary increase in weekly asylum payment during pandemic 01:00
Rural Ireland ‘has nothing to fear’ from the Greens, FG councillors are told 01:00

1 All students will not return to school even if social distancing rules are relaxed – McHugh
2 Miriam Lord: Taoiseach is trapped in a Zoom session from hell
3 Trump announces clampdown on social media companies
4 'Dangerous' student stalker sentenced to seven years in jail
5 Emily Maitlis thanks BBC viewers for support after Cummings row
Real news has value SUBSCRIBE