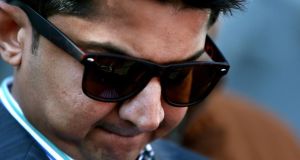 Praveen Halappanavar outside Galway County Hall after the jury in his wife Savita Halappanavar's inquest returned a unanimous verdict of death by medical misadventure. Photograph: PA 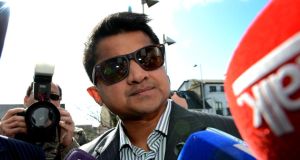 Praveen Halappanavar outside Galway County Hall after the jury in his wife Savita Halappanavar's inquest returned a unanimous verdict of death by medical misadventure. Photograph: PA

The jury in the Savita Halappanavar inquest has returned a unanimous verdict of death by medical misadventure.

Speaking in Galway this afternoon after the verdict, her husband Praveen Halappanavar said the way she was treated in hospital was “horrendous, barbaric and inhumane”.

“Medicine is all about preventing the natural history of the disease and improving the patient’s life and health and look what they did. She was just left there to die. We were always kept in the dark.”

“If Savita would have known her life was at risk she would have jumped off the bed, straight to a different hospital. But we were never told.”

Mr Halappanavar said he is still considering further action through the courts in Europe as be believes his wife’s right to life was breached.

“I haven't got my answers yet why Savita died. I will get to the bottom of the truth,” he said.

Speaking in Cork after the verdict Minister James Reilly said lessons learned from the inquest would feed into new guidelines for medical care. The Minister said he would have no issue apologising to Mr Halappanavar but wanted to read the inquest report first.

The jury debated for 2.5 hours today and then told Galway West coroner Dr Ciaran MacLoughlin it had reached the unanimous verdict of medical misadventure and strongly endorsed his nine suggested recommendations "after much consideration".

Dr MacLoughlin said the verdict did not mean that deficiencies or systems failures in University Hospital Galway contributed to Ms Halappanavar's death; these were just findings in relation to the management of her care.

After the jury returned their verdict, Mr MacLoughlin spoke to Mr Halappanavar. “Praveen, I want to offer you my sincerest and deepest condolences on the death of Savita,” he said.

“You showed tremendous loyalty in the love to her during her last week. The whole of Ireland has followed your story and I want, on their behalf, to offer our deepest sympathy.

“You will also be watched over and protected by the shadow of Savita who was in our thoughts during this painful and difficult journey.”

Dr MacLoughlin warned the deficiencies or failures in the care of Mrs Halappanavar did not cause her death. Mr Halappanavar sat with his legal team as the coroner, gardaí, the jury and legal teams for the hospital and its staff sympathised with him.

The chief operating officer at the Galway Roscommon Hospital Group acknowledged there were lapses in the standards of care provided to Mrs Halappanavar.

Speaking after inquest, Tony Canavan said deficiencies identified during the inquest would be rectified by the hospital. He said all recommendations made by the coroner would be taken on board, as would those made by the HSE and Hiqa reports into the death.

During seven days of often graphic and upsetting evidence, the jury heard that Mrs Halappanavar would probably still be alive today if the law had allowed an abortion as she miscarried before there was a real risk to her life, by which time it was too late to save her.

She was 17 weeks pregnant when admitted to the University Hospital Galway on October 21st last with an inevitable miscarriage.

She died from multi-organ failure from septic shock and E.coli, four days after she delivered a dead foetus.

Leading obstetrician Peter Boylan outlined a number of deficiencies in her care, but stressed that none on its own was likely to have resulted in Mrs Halappanavar’s death.

Ms Halappanavar died at the Galway hospital on October 28th last, having presented a week earlier with severe back pain. She was found to be miscarrying.The miscarriage continued for three more days during which time she developed severe sepsis.

1 The Medical Council should lay out exactly when a doctor can intervene to save the life of the mother in similar circumstances, which would remove doubt and fear from the doctor and also reassure the public. An Bord Altranais should have similar directives for midwives so that the two professions always complement one another.

2 Blood samples should be properly followed up and proper procedures put in place to ensure errors don't occur. That would be a national recommendation.

3 Protocols should be followed in the management of sepsis and there should be proper training and guidelines for all medical and nursing personnel. And that would be a national recommendation.

4 Proper and effective communication to occur between staff on-call and a team coming on duty and a dedicated handover time to be set aside for such communications. That should be applied nationally.

5 Protocol for sepsis written by the department of microbiology for each hospital and each hospital directorate. And that should be applied nationally.

6 A modified early warning score chart should be adopted by all hospitals in the state as soon as practicable.

7 There should be early and effective communications with patients and/or their relatives to ensure that a treatment plan is readily explained and understood. And this should be applied nationally.

8 The medical notes and nursing notes should be separate documents and kept separate. And that should be applied nationally.

9 No additions should be made to the medical records of a deceased whose death is the subject of a coroner's inquiry. Additions may inhibit the inquiry and prohibit the making of recommendations which may prevent further fatalities. And that should be applied nationally.