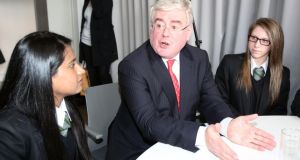 The secret recording of two Labour TDs speaking about a strategy to seek the gradual liberalisation of abortion law would have no bearing on the Government’s attitude to the X case legislation, Tánaiste Eamon Gilmore said in Belfast yesterday.

He said he expected the Government would bring forward its legislation on abortion today. “From the very beginning we have made it clear we want to bring certainty for women and their medical practitioners where a woman’s life is at risk.”

“I think this is about trusting women. I think it is about listening to what women want in this situation,” he said on the margins of an event he held with Northern Secretary Theresa Villiers, marking the 15th anniversary of the Belfast Agreement.

Mr Gilmore was reluctant to be drawn about the secret recording of two Labour TDs, Aodhán Ó Riordáin and Anne Ferris, as reported in the Sunday Independent .

“I don’t think it changes anything,” said Mr Gilmore. “The Government has already settled on an approach to this issue. The approach will be decided by Government this week. This is always an area that is complex, that is sensitive, but at the end of the day it’s about providing safety, it’s providing certainty for women, and we intend to legislate to that effect.”

He was also asked about claims that Labour was seeking to introduce abortion legislation by stealth. “No. We made a decision on this. We have a requirement to legislate. There is a decision of the European Court of Human Rights. There was a decision of the Irish Supreme Court 20 years ago which required legislation to be enacted. It hasn’t been dealt with for 20 years. ”

Suicide risk
Mr Gilmore was also reluctant to express a view about comments by former Fine Gael taoiseach John Bruton in yesterday’s Irish Independent suggesting that suicide risk should not be grounds for abortion.

“He is entitled to his views on this matter, but the Government has to make a decision on this matter. There is a requirement to legislate,” said Mr Gilmore.