Teen sunbed use on the rise in Dublin since 2014 ban

Survey finds number of teens using sunbeds up from 7.4% to 8.8% since ban 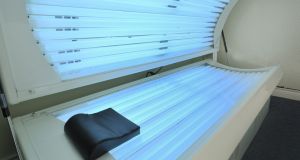 Regular sunbed use by under-35s increases the risk of skin cancer by 75 per cent. Photograph: iStock

More Dublin teenagers are using sunbeds despite the statutory ban on their use among under-18s introduced in 2014, according to new research.

A survey carried out at schools in Sligo and Dublin found that the number of teenagers using sunbeds had risen from 7.4 per cent to 8.8 per cent since the new legislation was introduced.

The research team, which was led by Dr Dermot McKenna, a consultant dermatologist at Sligo University Hospital, surveyed 616 postprimary students in Dublin and Sligo from November 2016 to February 2017. They had done a pre-ban survey of 755 teenagers in the same schools in 2013.

“There has certainly not been any improvement since the legislation was introduced and the numbers are clearly higher in Dublin,” said Dr Stephanie Menzies, a registrar at Sligo University Hospital who was part of the research team. She described the results as very disappointing.

The World Health Organisation has warned that regular sunbed use by under-35s increases the risk of skin cancer by 75 per cent.

Dr Menzies said allowances for a margin of error meant the overall figure could not be regarded as an increase but there had clearly not been any decrease in sunbed use among young people.

The results of the survey showed some children start using sunbeds at the age of seven.

Dermatology specialist Selene Daly, who was part of the research team, said a cultural shift was needed as had happened with smoking. “People don’t realise that skin cancer is the most common cancer in Ireland, ” she said.

She said young people were being bombarded with images on social media that made them want “the perfect skin, the perfect face, the big lips and the tanned body”.

“In one Dublin school they just go across the road to a tanning parlour on their lunch break”.

The researchers found the rate of sunbed use at home was up from 26 per cent of the total in 2013 to 30 per cent in 2017, which Dr Menzies said might suggest that this was a way of circumventing the legislation.

The study also showed students attending private schools were less likely to use sunbeds: 3.5 per cent compared with 11.4 per cent in public schools.

Ms Daly said it was becoming increasingly common for people to hire out sunbeds for use at home, especially coming up to a big family event such as a Holy Communion or wedding or a school debs.

“And there is no control over that. People bring the neighbours in and they can stay on for as long as they like.”

A spokeswoman for the Department of Health pointed out that the legislation does not regulate the domestic use of sunbeds.

The survey showed that 53 per cent of sunbed users had experienced burning from sunbeds to either face or chest.

The researchers also expressed concern at the fact that 12 respondents (2 per cent) admitted to using the banned substance Melanotan, which is used to enhance tanning.

“The problem with Melanotan is that it makes moles darker, which makes them harder for us to investigate and interpret,” said Dr Menzies. “It’s known as the Barbie drug: it increases libido, causes people to lose weight and makes them look tanned.”

Another worrying factor was that 65 per cent did not wear eye protection while on a sunbed despite the risks.

“Just scroll through Twitter and see all the people taking selfies while on sunbeds,” said Dr Menzies .

Kevin O’Hagan, cancer-prevention manager with the Irish Cancer Society, expressed surprise at the findings, saying an undercover survey by the society in 2015 had suggested compliance was good. The society had carried out inspections in five salons in Dublin in 2015, during which all refused access to a 17-year-old fair-skinned girl.

“We would be very disappointed to hear about these findings,” Mr O”Hagan said.

A spokeswoman for the HSE said it would review the findings, “which will potentially influence future policy”.

She said the HSE had carried out 271 inspections of sunbed establishments in 2016. The HSE said all sunbed business owners were required to register.