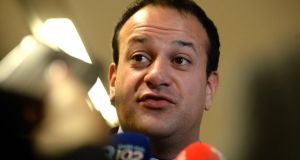 Minister for Health Leo Varadkar has announced major changes to the medical card system to make the processing of applications more sensitive to the needs of people with serious illnesses. File photograph: Cyril Byrne / The Irish Times

People with terminal illnesses will no longer have to have their medical card reviewed, Minister for Health has announced as part of a major change to the system.

Leo Varadkar also said the Health Service Executive can provide people with therapies or appliances, even in the absence of a medical card.

Changes in the medical card system will see more account taken of the burden of an illness as part of an “enhanced” assessment process.

The power of a GP to extend a medical card in difficult circumstances is to be extended to four months and to 12 months in sensitive cases.

There will be greater exchange of information between the medical card central assessment office and local health offices when applications are considered.

More than 10,000 people, who had their medical cards removed and later reinstated, have been told they will retain the cards pending implementation of actions to improve the scheme.

“From now on, wider discretion and greater humanity will be exercised as part of an enhanced process that takes into account the burden of an illness or condition,” Mr Varadkar said.

His initiative is the second attempt by the Government to lay to rest the controversy surrounding the award of discretionary medical cards, which was a major issue contributing to electoral difficulties for Fine Gael and Labour earlier this year.

Last May, former Minister for Health James Reilly tried to defuse the controversy over the withdrawal of cards by promising they would henceforth be given out on the basis of medical condition.

Mr Varadkar abandoned this approach after Prof Keane’s group found this was not possible.

Mr Varadkar said the controversy had convinced him more than ever that the only solution was a move to universal healthcare.

Without this, there would always be people above the financial threshold for qualifying for a card.

New legislation may be needed to ensure the burden of an illness was taken account of when awarding cards, he admitted; “We’re already pushing the existing legislation to the boundaries”.

It had not been done anywhere else in the world but it was not impossible.

Prof Keane’s group, whose report has been published, found it was neither feasible nor desirable to move away from the present system of awarding cards on financial grounds and listing medical conditions in priority order of eligibility.

“The present system works well in 95 per cent of cases but we’re trying to respond to the public demand for greater discretion in the remaining 5 per cent,” Mr Varadkar said.

He admitted he now regretted the Cabinet decision to impose “probity” savings on the HSE in the 2012, which had resulted in cards being taken away from sick people.

Two-thirds of people who applied for cards this year and were over the income limits were given a card on discretionary grounds, Minister of State for Primary Care Kathleen Lynch revealed.

The Irish Medical Organisation and children’s campaign Jonathan Irwin of the Jack & Jill Foundation both gave the measures a “cautious welcome” for the greater exercise of discretion proposed.

The Irish Cancer Society said it would campaign for a complete overhaul of legislation to decisions were made on medical rather than financial grounds.

The controversy over the removal of discretionary medical cards escalated in the run-up to the local elections earlier this spring and was widely blamed within Fine Gael and Labour for the parties’ poor performance.

Shortly after the election, the Government rowed back by re-instating up to 15,000 discretionary cards which had been removed during HSE reviews in the preceding years.