Overwhelming vote by doctors against proposals should be ‘wake-up call’ for Leo Varadkar , body says 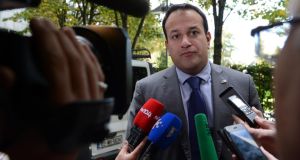 The Government will have to consider its options for filling hundreds of vacant consultant posts in hospitals after doctors rejected revised pay rates, the Minister for Health Leo Varadkar has said.

Doctors who are members of the Irish Medical Orgaisation (IMO) have voted overwhelmingly to reject revised pay rates for newly-appointed hospital consultants which ranged from €125,000 to €175,000.

The proposals, which were brokered at the Labour Relations Commission in September, also allowed for consultants with experience abroad to enter the Irish public hospital system at a salary level of up to €155,000 rather than at the starting point on the scale.

“The proposed salary scale ranging from €127,000 to €175,000 is very good by any reckoning. The real losers today are patients,” he said. “The Government will now have to consider its options in filling the consultant vacancies.”

Up to 300 consultant posts in public hospitals are currrently vacant - a situation which medical organisations blame directly on a controversial Government decision in October 2012 to cut by 30 per cent the salary of specialist doctors appointed after that date.

IMO director of industrial relations Steve Tweed said that the result of the ballot had not come as a surprise.

“”We repeatedly warned the HSE that the proposals put forward by management through the Labour Relations Commission were insufficient to secure the support of our members and would in fact still amount to a two-tier system of pay for consultants working side-by-side and doing exactly the same work with the same level of responsibility.

“The Government ignored the fundamental principle of equal pay for equal work and now must deal with the consequences of up to 300 vacant consultant posts across the Irish hospital system. A number that is set to rise over the coming months.”

In September, the Government moved to go part, but not all, of the way towards reversing a highly controversial 30 per cent pay cut put in place for all hospital consultants appointed after October 2012.

The decision by members of the IMO to reject the new pay offer came despite a last minute intervention by Mr Varadkar on Tuesday night in which he promised to support pay parity for newly-appointed hospital consultants as part of any new public service pay deal to succeed the Haddington Road agreement.

However, he said the revised pay rates for senior doctors proposed by the Labour Relations Commission “cannot be improved on”.

The Irish Hospital Consultants Association, the other main organisation representing senior medics, was not invited to take part in the recent talks that led to the emergence of the new pay offer on the basis that it had not signed up to the Haddington Road agreement.

Mr Tweed said the ballot result “ must be a wake up call for the Minister for Health and the HSE”.

“We should be appointing highly trained Irish doctors to these (vacant consultant) posts and not effectively forcing them to work abroad in hospitals where they are valued more and can deliver care in a properly structured and resourced environment.”

He said the Minister should now sit down with the IMO to reconsider the options.

“The unilateral pay cut of 30 per cent imposed on new entrant consultants has caused an inequity and manpower crisis which has gone on too long without a credible solution being put forward by the health service management. If we lose this generation of consultants we may never replace them and our health services will be much the poorer for decades to come.”

Following the 30 per cent pay cut introduced in autumn 2002, medical organisations forecast that it would lead to a brain drain among doctors.

Last year the HSE accepted that it was having difficulty in recruiting and retaining hospital consultants on the salary rates on offer.

In his comments on Tuesday, Mr Varadkar said the pay scales being offered to new entrant consultants ranging from €125,000 to €190,000 represented “a very good salary by any comparison”.