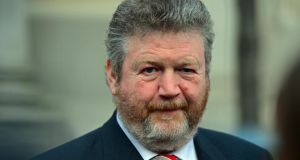 Children are being exposed to the potentially deadly measles disease if their parents do not get them vaccinated, the Minister for Health Dr James Reilly has warned. Photograph: Eric Luke

Children are being exposed to the potentially deadly measles disease if their parents do not get them vaccinated, the Minister for Health Dr James Reilly has warned.

Dr Reilly said the measles outbreak in Wales, which has now surpassed 900 cases and claimed the life of a 25-year-old man last week, ought to give “pause for serious thought” in Ireland given the proximity of the two countries.

Speaking at the launch of a public information campaign to coincide with European Immunisation Week, Dr Reilly said parents who do not allow their children get the MMR (Measles, mumps and rubella) vaccine are running a “grim risk” of exposing their children to a preventable disease.

A previous outbreak of measles in Dublin in 2000 which affected 1,500 children led to three deaths and more than 100 hospitalisations.

The outbreak was blamed on a health scare propagated by British doctor Dr Andrew Wakefield who linked the MMR vaccine to autism and bowel disease. He was subsequently found to have falsified the results and was struck off.

Vaccination rates dropped to below 70 per cent following that health scare.

An outbreak last year in west Cork which affected 60 children coincided with an area where the MMR vaccine uptake is considerably lower than the general population.

Dr Reilly said the MMR uptake at between 82 per cent and 85 per cent of the eligible population is “not good enough” as the target figure is 95 per cent.

Currently 92 per cent of one-year-old children received the vaccine last year though there are pockets in west Cork and inner-city Dublin where the uptake figures are lower than that.

He urged parents to “think about the facts and not the hype” around vaccination and to seek advice from medical professionals if they are worried.

He also advised health professionals to ensure that misinformation about vaccination does not become the norm.

HSE consultant in public health medicine Dr Brenda Corcoran said they did not have the budget for a television advertising campaign but were approached by pharmaceutical company Pfizer.

Dr Corcoran maintained the partnership was “good for both parties” and was discussed with the HSE procurement section before being passed.

She said Pfizer provided only one of the 12 vaccines currently given to Irish children and that was through competitive tendering.

Vaccination rates for MMR are improving every year, but there is still a risk among those children who were not vaccinated around the Millennium and are now teenagers. They are being offered catch-up vaccinations.

The HSE has set a goal of having Ireland measles-free by 2015, a goal which will not be accomplished unless the 95 per cent target rate for vaccination is reached.

Dr Corcoran said there is also a problem with the Whooping Cough vaccine as the present vaccine only lasts for 10 years. There were 480 cases of Whooping Cough last year and a further 80 cases to date this year.

Doctors now believe that a single whooping cough vaccine dose is not sufficient and that a second dose is necessary.

Coronavirus: Two more deaths brings total toll in State to 1,748 19:38
Eleven publicans found to be in breach of Covid-19 measures 19:10
Ministerial profiles: Who’s who 19:09
Hearing into Ian Bailey’s proposed extradition to France opens at High Court 18:59
State staff will have to use unpaid time off to isolate if overseas 18:45