Possibility of visits offers ray of hope to nursing homes 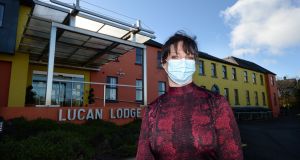 Sheila King, who runs Lucan Lodge Nursing Home, says she will remember the third wave of this pandemic with a great deal of sadness. Photograph: Alan Betson

Lucan Lodge in Dublin has, like many nursing homes across the country, come through a tragic Covid-19 third-wave outbreak but is buoyed by news that family visits might start again.

The privately owned nursing home was hit with outbreaks in the first and third waves of the pandemic, suffering two Covid-19 deaths last spring and a further 12 since the start of the year.

The care home puts the more severe third wave down to the infection rate being significantly higher in the winter and the more contagious UK “B117” strain circulating in December.

“What we found this time around was that this strain was much more transmissible than in the first wave,” said Sheila King, chief operations officer of Passage Healthcare, the nursing home’s owner.

“The reality is after Christmas, maybe from January 1st to 15th, if you could have seen Covid in the air, you would not have gone out in Dublin city. At that stage, there were so many infections.”

The first dose of the Pfizer vaccine was administered at the nursing home on January 13th but it takes up to 12 days for initial immunity to build up after the first dose and, in all, 42 residents tested positive at the 74-bed nursing home, of whom 27 had received the first dose.

Out of the 12 who died of Covid-19 during the third wave, 10 had received their first doses.

“Most of those people who died had the vaccine. The thing with Covid-19 is that it is a very, very unpredictable condition,” said Ms King.

“We thought these people were recovering. They had very few symptoms but then something would happen and then it would be a rapid deterioration and that was a very, very difficult time for some families. It was an anxious time, made more anxious because people were not allowed in.”

Some 32 of the residents at the west Dublin care facility have since recovered and 18 of the nursing home’s residents received their second dose on February 3rd. Three residents who were missed in the first round of vaccinations in January received their first dose that day.

Now that infections in nursing homes are declining due to the benefits of the vaccine, the sector is planning to reopen nursing homes to visitors again to bring back some normality for residents. Lucan Lodge is looking forward to welcoming back its visitors.

“We have done our best to keep in touch with families and do video calls with our residents to their loved ones but this is not the same as seeing someone in the flesh,” said Ms King.

She will remember the third wave of this pandemic with “a great deal of sadness”.

“It was a very, very tough time. I have been working in nursing homes forever and it has been the toughest time I have known,” she said.

“I know that staff are affected badly.”