IMNO: Government ‘going to have to address hours issue for nurses and midwives as well’ 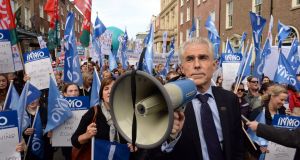 Nurses are to demand that the Government scale back additional unpaid hours which they must work each week on foot of concessions made to gardaí under a deal reached at the weekend.

Gardaí will see the number of unpaid additional hours they work reduced from 30 to 15 hours annually under the agreement reached between the Department of Justice and the Garda Representative Association (GRA).

The GRA said these hours would in the future be “self rostered” and could be worked in 15-minute blocks at the end of shifts to complete tasks.

Under the former Haddington Road public service agreement, nurses saw their working week extended by one and a half hours without additional payment.

General secretary of the Irish Nurses and Midwives Organisation (INMO) Liam Doran said the union would be seeking similar arrangements as offered to gardaí.

“The hours part of the Haddington Road and Lansdowne Road [agreements] are arguably the most offensive to a predominately female workforce.

Mr Doran said the executive council of his union would be meeting next week to consider a campaign strategy on a number of issues including the additional working hours.

“For the INMO the hours is a very much priorities issue. Without the introduction of a 37-hour week, our campaign will not stop,” he said.

Siptu health service divisional organiser Paul Bell said his members would be seeking similar concessions on the hours issue to those provided to gardaí.

He said Siptu would be examining the content of the deal reached by the Department of Justice with the GRA and would be very interested to see how the concession on hours for gardaí would affect its members.

“Our members also work unsocial hours. We believe our members will want a detailed discussion on the hours issue in any future negotiations.”

The Psychiatric Nurses Association also said it wanted to see the Government act on the additional hours which it members were required to work.

Nurses demonstrated outside Leinster House Tuesday as TDs returned to the Dáil following the autumn recess.

Mairead Gordon, a dual qualified children’s and general nurse, said she will likely be training younger nurses who are on higher pay than her, a situation she described as insulting.

“It’s hard enough to work in the health system that we are in because we’re short staffed all the time, we’ve an ageing population, so more and more patients that can be difficult to manage, and to have that added on top of it is an incredible insult.”

Karen McGowan, a more experienced emergency department nurse based in Dublin, said she was protesting in solidarity with her younger colleagues.

“They do feel very aggrieved about this unequal pay. They really feel extremely hard done by, it’s unfair. There’s no incentive to stay, they feel they owe the country nothing and they are constantly talking about leaving.”

He said increasing the pay of the 3,000 or so nurses affected by the anomaly would send a strong message. “It’s not a massive adjustment but it would send a signal to these people, who we want to stay in the system, that they will be treated with respect.”