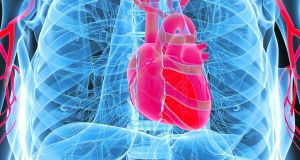 A simple blood test devised by Irish doctors has resulted in a near 40 per cent decrease in admissions for heart abnormalities and failure.

The research, which was carried out at a number of Dublin hospitals, adopted a blood test for patients who already have heart failure for those at risk of it.

The results were presented at the prestigious American College of Cardiology conference in San Francisco last month.

Some 1,300 patients over seven years took part in the project , led by Professor Ken McDonald, a consultant cardiologist at St Vincent’s University Hospital in Dublin and St Michael’s Hospital in Dú n Laoghaire, and supported by the Heartbeat Trust charity .

It used a blood test which measures levels of the B-type natriuretic peptide (BNP), a hormone that indicates how well the heart is functioning and whether specialised care is needed. The test costs €15- €20.

The test was performed on patients who exhibited signs of being at risk of heart failure and the patients were referred by 39 GP surgeries in Dublin and Wicklow. The risk factors include high blood pressure, diabetes and obesity. There was also a control group which did not undergo the test.

Dr McDonald said the result showed that incidences of heart disease among those who were identified as being at risk was 37 per cent less than those in the control group.

He attributed the lower disease levels to the awareness among patients of their risk factors and their willingness to change their lifestyles .

“The best way to prevent heart failure is to pinpoint people at risk,” he sai d. “ This blood test , above and beyond the routine risk indicators such as high blood pressure and diabetes, helps identifies the truly at -risk individual.”

Those who were identified through the test as being at risk saw a cardiologist and GP.

“Because of the cardiology and GP intervention, we were able to reduce the likelihood of heart failure and heart dysfunction. By identifying the patients who are truly at high risk, we find the patient takes better care of themselves,” Dr McDonald added.

“This is the first time this has ever been done nationally and internationally. The importance of it is that it focuses on intervention rather than waiting for the problem to develop.”

Heart failure is one of the biggest killers in Ireland affecting some 100,000 people a year.

Dr McDonald said they were now going to focus on the cost-effectiveness of the programme and he hoped that the HSE, which has supported the project, will help roll it out to other areas.