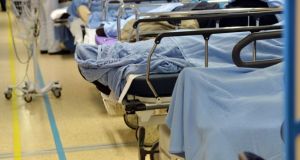 Almost 7,400 people were left in hospital without beds last month, an increase of 7 per cent on the same numbers left waiting in June 2018, the Irish Nurses and Midwives Organisation (INMO) has said.

Its new monthly summary of the state of hospital capacity also highlights some other developments – on June 25th, 482 patients were left stranded on trolleys, the highest total for any day in June since records began. It also represented a 49 per cent increase on the same day in 2018.

According to the INMO, the statistics show an apparent erosion of the so called “summer respite” - the season traditionally associated with less demand in hospitals.

“Our members tell us that there’s no longer a summer respite when it comes to overcrowding. Summer 2019 is as bad as winter was five years ago. Understaffing is driving year-round unsafe conditions,” said INMO general secretary Phil Ní Sheaghdha.

“The Government and HSE need to get a handle on this problem. That means implementing the safe staffing framework and making real progress on Sláintecare.

“Without serious investment and reform, this problem will continue to spiral, with patients and frontline staff paying the price.”

The INMO monthly figures, which tally the number of people left waiting on trolleys for beds in both A&E departments and in wards, showed that among 7,392 patients in June, 55 were children.