More than 390,000 on outpatient waiting lists 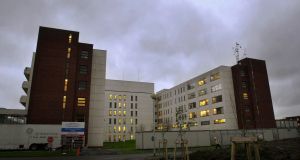 Beaumont Hospital in Dublin has more than 2,500 outpatients waiting more than 15 months to be seen. File photograph: Dara MacDónaill

The number of people enduring long waits for outpatient appointments has jumped almost 80 per cent since the start of the year while inpatient delays rose three-fold, new figures show.

Waiting times across all categories of patient increased last month as pressure on hospital services intensified, the figures from the National Purchase Treatment Fund indicate.

They show 17,693 people were waiting more than 15 months for an outpatient appointment at the end of February, up from 9,887 in December.

Minister for Health Leo Varadkar had pledged to end waits of more than 15 months by the end of last year, but failed to reach the target despite extra spending of more than €50 million.

The overall number of people on the outpatient waiting list is also up, by 15,000 in two months, to 390,410. This is the highest figure since early November.

While the problem of long waits is concentrated in a relatively small number of hospitals, numbers are rising sharply in those hospitals. Beaumont Hospital in Dublin has more than 2,500 outpatients waiting more than 15 months to be seen and Galway University Hospital has more than 1,800. More than 1,000 patients are waiting that long in Tallaght, Letterkenny, Cork University and South Infirmary hospitals.

One reason for the surge in outpatient waiting times is the cancellation of appointments as a knock-on effect of emergency department overcrowding. Hospitals have been under pressure this winter with a 9 per cent increase in attendances and the flu season shows no sign of relenting just yet.

Delays are worst in ear, nose and throat departments, orthopaedics and dermatology. Geographically, waiting lists are longest in the South/Southwest hospital group, followed by Ireland East and Saolta (west/northwest) groups.

The HSE says more than 2,500 of those waiting more than 15 months have appointments due in the next six weeks.

Waiting lists for inpatient appointment and daycase procedures are also up sharply. The number of patients waiting more than 15 months grew three-fold since the start of the year, from 746 to 2,115, as non-urgent work was cancelled due to emergency department pressures.

Inpatient and daycase waiting lists are longest in the Saolta hospital group, followed by Ireland East.