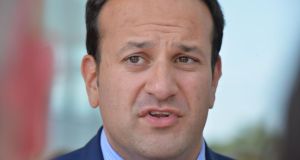 Minister for Health Leo Varadkar: A department briefing note says “the Minister would be disappointed if all pharmacists were not passing on the benefits of lower prices to patients”. Photograph: Alan Betson/Irish Times

Minister for Health Leo Varadkar has been told by his officials he has no power to set the prices of drugs and medicines bought by private patients. Department officials have also admitted they failed in 2012 talks with branded pharmaceutical manufacturers to get drug prices in Ireland reduced.

Many of the “complaints” in the media about high pharmaceutical prices relate to prices paid by people who buy the drugs themselves, as opposed to obtaining them through HSE schemes, according to a briefing note prepared for Mr Varadkar.

“Neither the Minister for Health nor the HSE has any power to set the prices of drugs and medicines purchased by private patients. However, the Minister would be disappointed if all pharmacists were not passing on the benefits of lower prices to patients,” the note states.

It says that if people are being charged prices that exceed the reimbursement price listed on the HSE website, plus a dispensing fee of between €3.50 and €5, they should “discuss the differential with their pharmacist to ensure they get the best possible price for the medicine concerned”.

Numerous surveys have shown Irish consumers pay many multiples of the price paid by British patients for commonly used medicines.

The briefing note claims successive pricing agreements with the makers of patented and generic medicines have produced savings of about €768 million since 2006. “There has been steady progress since the mid-2000s aimed at reducing the cost of pharmaceuticals and that work is continuing.”

It says the Department and the HSE sought to have the price of Irish-patented drugs reduced to the lowest of a basket of nine countries during negotiations with the Irish Pharmaceutical Healthcare Association in 2012. However, agreement could not be reached and the price remained at the average of the basket.

This agreement has provision for a mid-term review this year. “It is the view of the Department/HSE that this encompasses prices but IPHA may have a different view.”

Officials also say doctors should not be given financial incentives to reduce pharmaceutical expenditure.