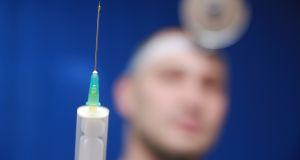 Controversies have pointed to a lack of transparency in the service over admission of errors, most recently in the scandal over baby deaths in Portlaoise hospital. Photograph: Getty Images

Minister for Health Leo Varadkar has admitted he is abandoning a promise to force doctors to admit to the mistakes they make.

Mr Varadkar promised a year ago to legislate for mandatory open disclosure by healthcare professionals of any mistakes involving patients.

Now, however, the Government plans to legislate for the mandatory reporting of only the most serious incidents such as patient deaths.

At an Oireachtas health committee a year ago Mr Varadkar said “it is my intention to legislate for it in the Health Information Bill, and to make it a legal requirement that there be open disclosure and a duty of candour, which I think is just right”.

The Minister’s spokesman said he was initially minded to legislate for mandatory reporting of errors, but “adjusted” his view on the advice of the chief medical officer, Dr Tony Holohan.

The revelation that the Government will not require doctors to admit to errors has caused dismay among patient groups, and prompted Fianna Fáil health spokesman Billy Kelleher to accuse the Minister of a “blatant U-turn”.

Controversies in the health system in recent years have pointed to a lack of transparency in the service over the admission of errors, most recently in the scandal over baby deaths in Portlaoise hospital.

He said healthcare providers, along with doctors and nurses, were often fearful that disclosure could increase the risk of being sued.

“An automatic duty of candour where patients are told about every error or near miss may lead to defensive documentation and a large bureaucratic overhead that distracts from patient care.”

The Government’s legislation on open disclosure supports open disclosure to patients by protecting the disclosure from legal proceedings, an approach Dr Holohan says has been taken in most countries that have laws on the issue.

Prof Deirdre Madden, who chaired the 2008 commission on patient safety, said patients were entitled to open and honest communication but before it was made mandatory barriers would have to be addressed. These included fears of litigation, loss of reputation and loss of work.