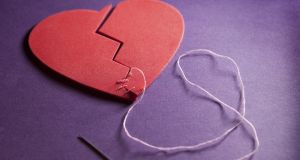 With a full recovery in days or weeks, most patients with Broken Heart syndrome experience a happy ending.

“Away, away you broken heart you

Stand me somewhere near the ocean

I will wait there wave after wave” Phil Stewart

Christy Moore’s live version of the song Away Ye Broken Heart is guaranteed not to leave a dry eye in the audience. It’s one of many references in culture to the severity of loneliness and depth of desolation felt by those for whom a close relationship has broken up or who have been recently bereaved. And, as Shakespeare illustrated in Romeo and Juliet, where Lady Montague dies of a broken heart after the banishment of her son, its deadly consequences have long been recognised.

What does modern medicine have to say about the reality or otherwise of a broken heart? “Broken heart syndrome” was first identified by Japanese doctors in 1990. They named it Takotsubo syndrome, after a Japanese octopus trap that resembles the distorted shape of the left ventricle of a heart affected by the condition. The large chamber of the heart balloons out at its apex while remaining narrow at the top. This sudden ballooning occurs following a blood stream surge of the stress hormone, adrenaline.

In a large study published earlier this year, researchers examined 500 Swedish patients with broken- heart syndrome. These patients were compared with others who had a heart attack (investigations showed a blockage in their coronary arteries) and also with a group with no heart disease (they had normal angiograms).

The study found that traditional risk factors for cardiovascular disease, such as smoking, high blood pressure, elevated cholesterol and diabetes, were less common in those with broken heart syndrome.

More than 80 per cent of those with a broken-heart diagnosis were women. The study also shows that, compared to the group who had heart attacks, patients with broken- heart syndrome were more educated and had higher incomes.

A Swiss study, also published this year, added a different twist to the story. Based on some 1,750 patients in nine countries, it found that 96 per cent had suffered a sad or stressful event prior to the episode of Takotsubo syndrome. But for the remaining 4 per cent , researchers, writing in the European Heart Journal, identified a profoundly happy event as a trigger for the cardiac event. Events included a birthday party, a wedding, a surprise celebration, the birth of a grandchild, and a rugby team winning a game.

Inevitably, the finding has led to speculation that a minority of Takotsubo patients are actually experiencing “happy heart syndrome”.

Whatever the emotional trigger, it seems the extremely high levels of adrenaline cause part of the heart to shut down to protect itself. In slamming on the brakes, some of the heart muscle just stops pumping, while other areas go into overdrive. An over-activation of the sympathetic nervous system and a shutting down of the parasympathetic system is thought to be the mechanism; why it affects just some people and not others remains a mystery.

The signs, symptoms and even the initial test results of someone with Takotsubo syndrome can be similar to those seen in a person with a heart attack. Chest pain and shortness of breath are common to both. However, the electrocardiograph (ECG) has a different pattern to that seen in someone suffering a heart attack.

When a coronary angiogram (dye test) is carried out, it will show no sign of blockages in the coronary arteries. But there will be signs of ballooning and unusual movement in the lower left heart chamber.

With a full recovery in days or weeks, most patients with Broken Heart syndrome experience a happy ending.