Massive increase in Irish spiders leads to surge in bites 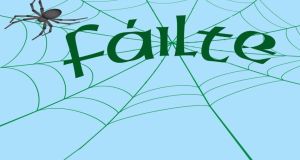 The recent good summer and benign autumn weather in September has led to a massive increase in Ireland’s spider population, according to experts in arachnids. Photograph: The Irish Times

The good summer and benign autumn weather in September has led to a massive increase in Ireland’s spider population, according to experts in arachnids.

The growth in numbers has led to a surge in reports of people being bitten by spiders, in some cases with severe reactions.

In one case, a Dublin man spent a day in hospital after reportedly being bitten by a false widow spider in his home, while the same species was also blamed in two cases in Cork where women said they suffered swollen limbs after being bitten

“Spiders have been making hay while the sun shines. They’ve been growing all summer and are very abundant now, before the bad weather wipes them out,” said Stephen McCormack, an entomologist and expert in spiders.

Amateur arachnologist Myles Nolan says one reason people are noticing spiders more at present is because many of them are highly active at this time of the year, as it is their mating season. “Because of the mild summer many spiders are moving around, and younger ones seeking to overwinter might be moving indoors.”

The main suspect in the current rash of spider biting tales is the false widow, a recent arrival to our shores. Related to the black widow spider but not nearly as dangerous, it is native to the Canary Islands.

Mr Nolan says he first came across the species in Ireland back in the 1990s, in Bray. Since then, it has spread across much of the south-east of the country, where it lives in dark parts of built-up areas, mostly likely very near where you live.

In recent years, media blitzes about the alleged dangers posed by the false widow have been regular staples each autumn. The British National History Museum says it has received over 1,000 inquiries about the species over the past 15 years, most following an upsurge in media reports.

“In no way can this species be considered deadly,” says the museum, although it does bite more than any other spider, and this can be painful.

Few, if any, of the media reports have been backed up by formal identification of the spider that caused the bite, it notes.

“These extraordinary symptoms are more likely to be caused by other medical complications, such as bacterial infection of a wound that may or may not be attributable to a spider bite.”

You’re far more likely to be stung by a wasp or bitten by a dog.

McCormack, the co-author of a book on the insects of Ireland, puts our growing fear of spiders down to our growing separation from the outdoor environment.

“In older days, spiders and other little beasts would be in and out of the house and we would be more familiar with them. Nowadays, we are urbanised and distant from wildlife.”