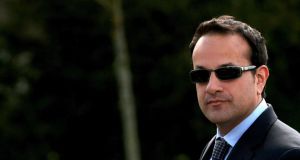 Leo Varadkar: ‘In terms of negotiating a good budget for health, waiting lists that make things look better than they are are no good to me.’ Photograph: Brian Lawless/PA Wire

Minister for Health Leo Varadkar has said there is no official policy to manipulate hospital waiting lists to meet official targets.

Mr Varadkar said neither he nor senior Health Service Executive leaders were aware of any memo instructing staff to restrict the number of patients on the waiting lists who were about to be classified as “long waiters”.

“Some” patients on the list were outsourced to the private sector at the end of last year, he said. “Some didn’t need to go further [while] others had to be put back on the list because they needed surgery following their appointment.”

HSE director of acute hospitals Dr Tony O’Connell said “only a few hundred” patients on the waiting lists were affected in this way. In their cases, the private consultant recommended they have a procedure, but before this could be done in the public system, they had to see their public consultants again.

Dr O’Connell said such “double-handling” was inefficient but he denied it amounted to manipulation of the list, even though the patients returning to the public waiting list were put at the end of it. He said public doctors weren’t always confident in doing a procedure recommended by a private specialist if they hadn’t seen the patient first.

The Sunday Business Post last weekend quoted from an internal HSE memo which it claimed promoted the manipulation of lists. While the memo was from one HSE region it stated the practice was happening “throughout the health service in all clinical areas”.

New editor Ian Kehoe said yesterday the memo was “real” and came from a senior level within the health service.

The Irish Medical Organisation accused the HSE of “elderly abuse” through the practice of writing to patients on lists, many of them older people, and requiring them to recommit to the list or lose their place.

Mr Varadkar said the practice of outsourcing to the private sector had ceased.

“The only figures I’m interested in are accurate ones that allows us to provide good services. In terms of negotiating a good budget for health, waiting lists that make things look better than they are are no good to me.”

In relation to medical cards, he promised to devise a new system for awarding discretionary cards that takes account of the effect an illness has on a person and their family. However, this wouldn’t be a straightforward task, he warned.

Mr Varadkar said he needed time to consider the report on the issue by a panel chaired by Prof Frank Keane and hoped to bring proposals to Cabinet in the next few weeks.

“While the report is very clear about the listing of illnesses it doesn’t quite provide the solution to the problem and what I’m looking for are solutions.”