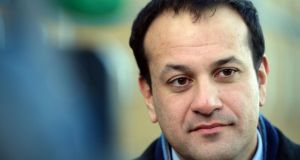 Minister for Health Leo Varadkar has said blood donation is not an issue of equality and decisions on changes in blood donor deferral for any category of people will be made on the grounds of science. Photograph: Dara Mac Donaill/The Irish Times

Blood donation is not an issue of equality and decisions on changes in blood donor deferral for any category of people will be made on the grounds of science, Minister for Health Leo Varadkar has said.

Speaking in Limerick, Leo Varadkar said he has a report from the Irish Blood Transfusion Service that presents a number of options.

Mr Varadkar is considering a policy review from the Irish Blood Transfusion Service on ending the lifetime ban on gay or bisexual men donating blood.

The Minister for Health said the report requires further consideration and that his department wants to consult with patient groups and to seek advice from the Chief Medical Officer.

“I think it is important to do that first because any decision that’s made should be made on the grounds of science.

“This is an issue of patient safety and medical science, not an equality issue in my view.

“We always need to bear in mind that when it comes to blood transfusion it’s the person that’s receiving the blood who takes the risk, not the person donating it. So this decision will be made in consultation with others and it will be made on a scientific grounds.”

The Irish Haemophilia Society (IHS) has also said it believes that any change in blood donor deferral for any category of people should be based on scientific evidence.

Speaking on RTÉ’s Morning Ireland, Mr O’Mahony said everything should be done to protect donated products and he said the same principles had to be applied to all groups.

“If the deferral can be changed, based on scientific evidence, without increasing the risk to the safety of the blood supply, then it’s acceptable.”

The ban was introduced in the mid-1980s, at a time when concern about the spread of Aids was at its height.

1 Varadkar declines to negotiate with Fianna Fáil on forming government
2 Could Ireland put towns under lockdown if coronavirus arrived?
3 State would need 16 fighter jets for full air defence capability, expert says
4 Dublin man may have been stabbed to death by woman in parking space row
5 Coronavirus: Ireland-Italy rugby match likely to be called off
Real news has value SUBSCRIBE