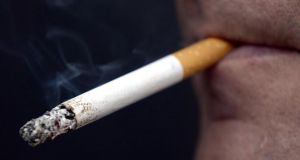 Minister for Health Leo Varadkar has warned smokers of the number of serious diseases linked to smoking and insisted the Government will introduce plain cigarette packaging. File photograph:Jonathan Brady/PA

Minister for Health Leo Varadkar has warned smokers of the number of serious diseases linked to smoking and insisted the Government will introduce plain cigarette packaging.

“The Government is absolutely pressing ahead with our plans to introduce plain packaging for tobacco,” he said on Tuesday morning.

The Minister was speaking at the launch of a new innovation centre for personalised cardiovascular care developed by The Heartbeat Trust.

“I’m speaking at three cardiovascular events this week alone and I spoke at an event yesterday on esophageal cancer. There’s another event next week on cervical cancer.

“There are so many diseases that you wouldn’t think of that are linked to smoking.”

Meanwhile, a leading cancer charity has said it will no longer accept any corporate donations from Arthur Cox, the legal firm acting for tobacco giant Japan Tobacco in threatened court action against the State to block plain cigarette packs.

The Irish Cancer Society said it had received €20,000 in both 2013 and 2014 from Arthur Cox, one of Ireland’s most powerful business law firms and a legal adviser to the Health Service Executive.

“Because Arthur Cox are now leading a legal action, which has the clear aim of preventing the enactment of legislation which we consider crucial to the prevention of cancer, we will therefore now decline any offer of a corporate donation from Arthur Cox,” said the Irish Cancer Society’s spokeswoman. There was no immediate comment from the law firm.

Following the industry campaign against plain packs, the charity is now reviewing its partnerships. “In light of the highly aggressive moves by ‘Big Tobacco’ to attempt to block this key initiative to prevent cancer, the Irish Cancer Society is conducting a review of our corporate partnerships to ensure that our partnerships are fully aligned with our values and mission.”