Late change could allow Mater opt out of providing abortions

Draft legislation stated no institution could refuse to provide a termination 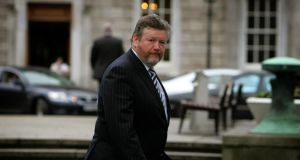 Dr James Reilly: he steered clear of the controversy yesterday, saying it would not be appropriate to comment when the hospital board had yet to discuss the issue. Photograph: David Sleator


A late change to the Protection of Life During Pregnancy Act could enable the Mater hospital to opt out of providing abortions under the legislation.

“We see absolutely no indication or room for an institution to have a conscientious objection,” Minister for Health James Reilly said at the time the legislation was published.

Yesterday, however, The Irish Times reported that a member of the board of directors of the Mater said it “cannot comply” with the Act and carry out abortions. Fr Kevin Doran said this would go against the ethos of the Catholic voluntary hospital.

Dr Reilly steered clear of the controversy yesterday, saying it would not be appropriate to comment when the hospital board had yet to discuss the issue.

Asked about Fr Doran’s assertion, a spokesman pointed to remarks made by the Minister during the Dáil debate on the legislation.


‘No right to refuse’
Dr Reilly had made it clear there was no right of conscientious objection for institutions in relation to the legislation, he said, and that publicly funded hospitals did not have a right to refuse services to patients that were provided for under law.

Other members of the hospital’s board of directors, when contacted yesterday, declined to comment on the views of Fr Doran.

Des Lamont, chairman of Medisec Ireland Ltd and a director of Mater Campus Hospital Development Ltd, said: “I have no comment to make nor will I respond to any questions on any aspect of the business of the Mater hospital outside of a meeting of the governors of the Mater Misericordiae and Children’s University Hospital Ltd company.”

Sr Margherita Rock, director of mission effectiveness at the hospital, said she could not comment as “it would be unfair” to her board colleagues, while Dublin GP Dr Mary Carmel Burke said she had “no comment”.

The hospital switchboard operator declined to put calls through to other members of the board yesterday, directing calls to the hospital’s public relations company.

As 23 of the 25 hospitals named in the legislation as “appropriate institutions” for abortions to be carried out are managed by the HSE, the question of whether they might opt out of complying with the Act does not arise.


‘Following law of land’
St Vincent’s University Hospital, Dublin is the second Catholic voluntary hospital designated in the Act to carry out abortions. It is part-owned and part managed by the Sisters of Charity and, like the Mater, is managed by a board of directors independent of the HSE. A spokesman said the hospital would “as always be following the law of the land”.

Two members of the Sisters of Charity who sit on the board at St Vincent’s declined to comment on the prospect of abortions being carried out at the hospital. Sr Mary Benton and Sr Agnes Reynolds both said the issue was a matter for the board as a whole.

Originally, the legislation provided for terminations to be carried out only in publicly run maternity units.

However, in response to calls from doctors, who pointed out that emergency situations might require a termination to be performed in a mainstream hospital, six more hospitals were added to the list. None of the three Dublin maternity hospitals has an intensive care unit.

In addition to the Mater and St Vincent’s, Beaumont, Tallaght and St James’s hospitals in Dublin, and Limerick’s Regional General Hospital were added.

In May, the Catholic bishops expressed concern about terminations being carried out in institutions with a Catholic ethos.