Irish rank high among most overweight in Europe

Some 22 per cent of girls and young women are overweight, ranking Ireland fifth in Europe 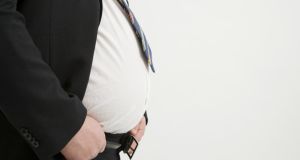 Some 26.6 per cent of Irish young men are obese or overweight, the eighth-highest figure in Europ

western Europe, but levels of obesity have yet to reach the levels found in many of our neighbours, according to a new analysis of the disease in the Lancet.

Some 22 per cent of Irish girls and young women are obese or overweight, ranking Ireland fifth in Europe, according to the survey published today. Over half of all adult women – 50.9 per cent – are overweight or obese, the eighth- highest figure in the continent.

Levels are higher among males, though comparatively the problem is worse in other countries. Some 26.6 per cent of Irish young men are obese or overweight, the eighth-highest figure in Europe. Among adult men, 66.4 per cent fall into this category, the sixth-worst figure for the region.

The study says there has been a startling increase in rates of obesity and overweight over the past 33 years, with the numbers affected rising from 857 million in 1980 to 2.1 billion last year.

The authors calculate that for the UK to reduce weight to 1980 levels would need an 8 per cent reduction in consumption, costing the food industry €10.7 billion a year.