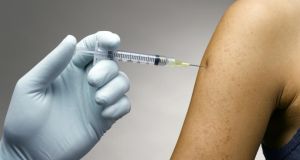 The Government should consider introducing a “no jab, no pay” policy on vaccinations similar to that planned in Australia, according to the Irish Patients’ Association.

However, public health doctors said the Australian government’s plan to penalise parents who fail to vaccinate their children by depriving them of benefits is unlikely to work.

“Immunisation works not just for children but throughout a person’s lifetime. We should certainly consider the Australian proposal,” says Stephen McMahon of the IPA. “Vaccinations don’t just protect the person who receives the jab but also confers immunity on ‘the herd’ - you and me.”

Prof Anthony Staines, chair of health systems in DCU, says more political leadership is needed to encourage people to have their children vaccinated. In some years, measles rates in Ireland have been higher than in the US, he points out.

“There are challenges around getting vaccination rates up, but in my view incentives work better than punishment,” says.

A significant proportion of the Irish population does not get vaccinated, some for ideological reasons, thereby increasing the risk of the spread of communicable diseases such as measles, he said. “However, many of these people fail to get vaccinated because their lives are chaotic – they are drug users, homeless or their lives are chaotic. If you take money away from them, you’ll make a bad situation much worse.”

Prof Staines says Ireland could follow the example of France, which gives small financial incentives to people to turn up for ante-natal care.

There are risks associated with some vaccines, he acknowledges, but these are outweighed by the risks of being exposed to the diseases they protect against.

Prof Joe Barry of the Department of Public Health in TCD says the Australian initiative, while putting the spotlight on vaccination, is unlikely to prove acceptable in Ireland. “Generally, the carrot is better than the stick when it comes to vaccinations, and there may be a role for incentives.”

Under the Australian plan, parents who are anti-vaccination will be denied government payments of up to AU$15,000 (€10,860) per child. Australia has vaccination rates of more than 90 per cent for children aged one to five, but more than 39,000 children under seven have not been vaccinated because of their parents’ objections, an increase of more than 24,000 since 2005.

In Ireland, the HSE says vaccination is not compulsory and parents consent to vaccinations for children and young people up to the age of 16. A decent Department of Health report found MMR vaccination rates fell marginally short of the 95 per cent target but called for further investigation into the rate of uptake varies so much across the country.