Ireland set to be most obese country in Europe, WHO says

Irish men at forefront of trend, leading an ‘overweight’ table of 53 countries 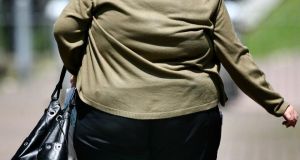 In terms of obesity alone, the estimates show a big jump for women in the Irish Republic, soaring from 23 per cent to 57 per cent. Photograph: Gareth Fuller/PA

Ireland is on course to become the most obese country in Europe, according to the latest figures from World Health Organisation (WHO) experts.

Europe is heading for an unprecedented explosion in rates of obesity and excess weight — with the Ireland at the forefront of the trend, say researchers.

By 2030 Europe will face an obesity crisis of “enormous proportions”, said the report.

In terms of obesity alone, the estimates show a big jump for women in the Irish Republic, soaring from 23 per cent to 57 per cent.

In 2030, the proportion of obese and overweight men in Ireland is projected to rise to 89 per cent with a corresponding 85 per cent of women falling into this category.

The forecast puts Irish men are at the top of an “overweight” table of 53 countries, matched only by Uzbekistan.

As far as women are concerned, Bulgaria and Belgium are predicted to have the highest proportion of overweight and obese individuals in 2030.

The so-far unpublished estimates, part of the WHO Modelling Obesity Project, were presented at the European Congress on Obesity in Prague, Czech Republic.

For this study, the “overweight” category also included anyone who was obese.

Using these criteria, researchers looked at data from all 53 countries in the WHO European region, to compare recorded and projected figures for 2010 and 2030.

Dr Laura Webber, from the UK Health Forum in London, who co-led the research, said the study presented a “worring picture” of rising obesity across Europe.

“Policies to reverse this trend are urgently needed. Although there is no ‘silver bullet’ for tackling the epidemic, governments must do more to restrict unhealthy food marketing and make healthy food more affordable.

Colleague Dr Joao Breda, from the WHO regional office for Europe in Geneva, Switzerland, said the forecast presented a “bleak picture” of an obese future for many European countries if action was not taken.

“Action taken today can prevent these predictions from becoming reality and in some European countries the trend is already flattening off thanks to preventive measures including successes, for example, in the area of childhood obesity,” he said.

“The study should be used with some caution as it was relatively small and was based on nationally available data that may not reflect the latest WHO estimates.”

While few countries were expected to see stable or decreasing overweight and obesity rates, the Netherlands appeared to be doing better than most.

In Ireland, the findings of a new study by the Economic and Social Research Institute (ESRI) into the benefits of playing sports, in addition to health and fitness, at secondary school were also released on Wednesday.

The results showed students who played sports in their final school years were more likely to continue a formal education after leaving school.

It stated one of the reasons might me people who took part in sport were more likely to have enjoyed the education environment and done well in exams.

The report suggested another reason could be that going to college allowed more convenient opportunities to continue to play sport.

The survey, which reseached voluntary participation in sport and not physical education classes, interviewed 2,025 people about two years after they had left school in 2007.