Inquest into death of Indian woman after childbirth begins 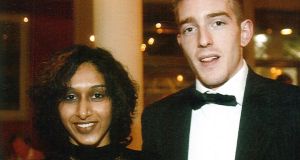 A solicitor representing the family of Dhara Kivlehan, who died in Belfast four days after giving birth in Sligo Regional Hospital in 2010, said her husband Michael and other relatives had ‘gone through hoops’ for four years in an attempt to get answers.

The family of a young mother who died after giving birth at Sligo Regional Hospital has been put through hoops in their efforts to get answers, their solicitor maintained today.

Indian-born Dhara Kivlehan (29) died in the Royal Victoria Hospital Belfast on September 28th 2010, four days after she was airlifted from Sligo where her son had been born.

As the inquest opened in Carrick on Shannon for submissions on what witnesses should be called, Damien Tansey, solicitor for the Kivlehan family, said only four of the 12 clinical staff who treated Ms Kivlehan in Sligo had provided depositions so far. He said this was a “sad indictment” and a matter of concern for the family because “with the passage of time, people forget”.

Mr Tansey told coroner Eamon MacGowan that he hoped to call 20 staff from Sligo hospital including nurses, midwives and doctors, while another 14 potential witnesses had been identified at the Royal Victoria Hospital. He had identified 12 Sligo-based consultants he believed could assist the inquest , saying eight of these were “essential”.

A request by the family for an inquest in Sligo was initially refused by the then coroner Dr Desmond Moran before the Attorney General ordered a hearing should take place.

Last December the HSE agreed to pay the family almost €800,000 in damages and “unreservedly” apologised to them.

“Soon it will be four years since this tragedy and to say that the Kivlehan family have gone through hoops to get an inquisitorial process under way with a view to extracting answers would be an understatement,” said Mr Tansey.The family was “very very disappointed” that it had taken so long to get to this stage, he added.

Ms Kivlehan moved from India to London in 2002 to study fashion and textile design.

She met her husband Michael, they married in 2005 and settled in Co Leitrim. Mr Tansey remarked that she had loved this country and “had become more Irish than the Irish themselves”.

He said there were comparisons with this case and the case of Savita Halappanavar whose death at Galway University Hospital in 2012 made headlines around the world .

Counsel for the HSE Adrienne Egan objected when Mr Tansey said there were “uncanny similarities” between the two cases, both involving young women who were born in India and having their first child. Ms Egan said the circumstances of the Halappanavar case were “entirely different”. Mr Tansey said that in that case an inquest had taken place within six months “but here we are after four years and we still have not had an inquest”.

Michael Kivlehan was accompanied at the hearing by Sean Rowlette, whose 36-year-old wife Sally died last year after giving birth at Sligo Regional Hospital. Mr Tansey told the coroner that while the purpose of an inquest was so lessons could be learned to safeguard against further tragedies , unfortunately “in this particular area it seems that lessons were not learned because last year another young woman died at Sligo general hospital after giving birth”.

Speaking after the hearing, Mr Kivlehan from Dromahair in Co Leitrim said he had “up and down days” but that his son Dior, now almost four, was “the twinkle in my eye”.

He said it was hard to hear about other cases which happened following his wife’s death. He also pointed out that if as expected a full hearing begins in September, it will be around the fourth anniversary of his wife’s death.

The coroner indicated he will have ruled by July 9th on what witnesses should be called and will make his decision known to the legal teams for the HSE and the Kivlehan family. A provisional date for a full hearing, which is expected to last for five days, has been set for September 22nd,the day after Dior Kivlehan’s fourth birthday .