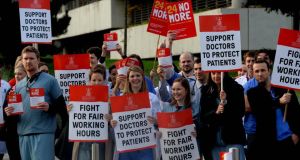 The Irish Medical Organisation has said it had received an invitation to attend talks at the Labour Relations Commission on the doctor’s strike tomorrow morning.

A spokesman said the IMO’s non consultant hospital doctor committee would meet tomorrow to consider whether or not to accept the invitation.

Doctors have called on health chiefs to see sense in the long-running dispute over working hours and avoid a second strike.

Fifty-one hospitals were hit by a walk-out by 3,000 non-consultant hospital doctors with pickets placed outside at least eight hospitals for most of the day.

Eric Young, IMO assistant director of industrial relations, said its members were united, strong and determined to see this campaign through to a successful conclusion.

“We will continue to try and minimise the impact of this dispute on patients but we must continue the campaign until the HSE sees sense and brings an end to this sorry chapter of the abuse of NCHDs and patients,” he said.

The strike began at 7am and will continue until midnight tonight with hospitals operating at a Sunday standard. Scores of doctors picketed the Mater, Beaumont, St Vincent’s and Connolly hospitals in Dublin and outside the capital in Cork University, Tullamore, Portiuncula and the Mercy in Cork.

The doctors’ strike followed weeks of failed negotiations with the HSE over shifts that run for more than 24 hours.

Taoiseach Enda Kenny urged the striking doctors to return to the negotiating table. “I would say the place to sort it out is at the Labour Relations Commission — not across the airwaves. That’s a tried and tested forum,” he said.

Mr Kenny said the commission can resolve the dispute. “I do hope that this will be responded to in a positive fashion and hopefully can be resolved so that, understanding that we want to get to a point at the end of next year where the working time directive is fully implemented in respect of all the doctors and all the hospitals as should be many years ago,” he said.

Doctors carried out any required transplant and dialysis service and the normal weekend palliative care and attended for patients undergoing active chemotherapy and radiotherapy which cannot be deferred. They maintained they had received exceptional support from the public and medical colleagues.

Mr Young added: “I think everybody has seen that the responsibility for this sad state of affairs rests with the HSE and there has been huge support for our efforts to bring an end to the routine abuse of NCHDs.”

Dr John Donnellan, of the Irish Medical Organisation (IMO), blamed the Health Service Executive (HSE) for the withdrawal of services. “Responsibility for this day of action rests fairly and squarely with the HSE who have abused the position of NCHDs for over a decade,” he said.

“Throughout that time they have misled doctors, they have broken promises and commitments and they have ignored their obligations under EU law.

“As a result they are presiding over an unsafe working environment where the health of patients and that of our own NCHD colleagues is routinely put at risk.Today we are saying loud and clear — enough is enough we are not taking this any more.”