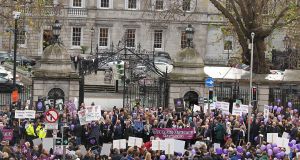 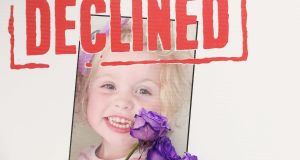 A picture of girl called Grace Duffy on a poster during a protest about the CF drug Orkambi at Leinster House. Photograph: Stephen Collins/Collins

The Health Service Executive and the US makers of cystic fibrosis drug Orkambi are set to re-enter talks on the price of the product but have not agreed the terms on which they will re-engage.

Vertex Pharmaceuticals said it wanted Minister for Health Simon Harris and his officials to attend talks along with the HSE, but Mr Harris has said he has no role in the negotiation of prices with drug companies.

The Minister has sought to collaborate with other countries on an agreed approach to negotiations on Orkambi and the HSE has warned Vertex it must offer a more realistic price that Irish patients can afford.

Five months of negotiations have failed to produce an agreement to supply the drug to 550 Irish CF patients. Vertex initially sought €159,000 per patient per year, but claims it has substantially reduced its asking price in talks.

The HSE says the amount being sought is still exorbitant, and called on the company to reveal how much it intends to charge for Orkambi and to “stop hiding behind confidentiality clauses”.

Vertex said it wanted a resolution as quickly as possible but “to that end we ask that the meeting happens with the right people to make a decision around the table”. If Mr Harris and department officials were present, it would ensure the company’s decision-makers were also present.

The news of fresh talks on the drug came as thousands of CF patients, families and supporters demonstrated outside Dáil Éireann in support of early access to the groundbreaking treatment.

Protest organiser, CF patient Jillian McNulty, said she would not be at the Dáil but for the treatment, which she receives as part of a clinical trial. Her lung function had improved by almost 10 per cent and she has spent up to a year less in hospital since being put on the drug.

She accused Taoiseach Enda Kenny of failing to respond to her request for a meeting. “I want you, Taoiseach, to look me in the eye and tell me I’m not worth this drug,” she said, to jeers from the crowd.

Ms McNulty said Mr Harris had called her earlier to say he was trying his best to ensure Orkambi was made available. He was in Lisbon attending talks with other health ministers and drug companies on overall medicine pricing.

Mr Harris said that at this meeting he raised the price Vertex has put on the drug, which made it inaccessible to CF patients around Europe.

Aisling Golden told the gathering her 21-year-old sister Gráinne had “waited and waited and waited” for Orkambi to be made available. But “CF doesn’t wait for anyone” and she died last February.

“It is not fair that we have to go through the horrific, traumatising things that CF does to a body.”

Cystic Fibrosis Ireland chief executive Philip Watt pointed out that 32 new cancer drugs have been introduced over the past four years, whereas just two drugs have been developed in 20 years for CF.

Keith McCabe from Greystones, father to three-year-old CF patient Senan, called on Mr Kenny to “stop playing with my son’s life”. Vertex should “man up” and “stop messing” with the CF community, he added.

Addressing the protest, Fianna Fáil leader Micheál Martin said he favoured intensive negotiations to ensure the drug was made available as soon as possible. Sinn Féin president Gerry Adams suggested the drug be made available to patients who need it on a trial basis.

At the start of the protest, one minute’s silence was observed for those who have died due to CF, with patients having an average life expectancy of 31 years. At the end, protesters placed purple roses on the ground before the Dáil, having been informed they were not allowed to put them on the railings of Leinster House.