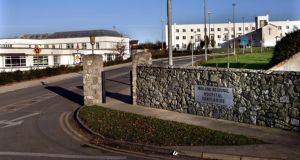 The Midland Regional Hospital, Portlaoise: Despite concerns raised in the review about the safety of services, the HSE said there was no threat to existing facilities at the hospital.

A confidential HSE report has recommended the closure of the emergency department and an end to surgical services at Midland Regional Hospital in Portlaoise.

The unpublished review says the 24-hour, seven-day-a-week emergency department should be replaced by a medical assessment and local injury unit operating during the day. Serious cases, and all night-time cases, would be referred to other hospitals in the Dublin Midlands Hospital Group.

The review was commissioned following the deaths of at least five babies in the hospital’s maternity unit in recent years. A report into that issue raised questions about the quality of services across the hospital, not just in the maternity unit. The HSE appointed a team of medical specialists led by its then national director of acute hospitals, Ian Carter, to review medical, surgical and emergency services at the hospital. Its report, dated last March, says the 24/7 emergency service at Portlaoise is “not clinically sustainable” and warns of a collapse in care processes and risks to patient care arising from the “many internal medical challenges” at the hospital.

Making up for the loss

Despite concerns raised in the review about the safety of services, the HSE said last night there was no threat to existing facilities at the hospital. A spokesman said there were no plans to reduce emergency cover. Several measures, including the appointment of extra staff, had been implemented, he said.

Last week The Irish Times published the Department of Health’s submission to the Government’s comprehensive spending review, which suggested closing 24-hour services at five hospital emergency departments, including Portlaoise, if its budget were cut.

Any attempt to downgrade services at the hospital, which is in the constituency of Fine Gael Minister for Foreign Affairs Charlie Flanagan, is likely to be resisted locally.

A separate report on Portlaoise Hospital by the Health Information and Quality Authority is expected to be published in the coming months.