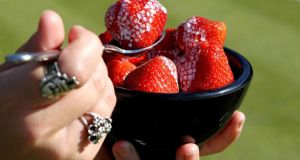 The FSAI said there is no evidence to suggest fresh Irish or fresh imported berries are implicated in an outbreak of Hepatitis A, which has been linked to imported frozen berries. Photograph: PA Wire

An outbreak of Hepatitis A has been linked to the consumption of frozen berries imported into Ireland.

Consumers are being advised to boil all frozen berries before eating them after ten people have been diagnosed with the virus.

The Food Safety Authority of Ireland (FSAI) said the source of the outbreak has not been confirmed, but five of the cases have been linked to the consumption of imported frozen berries, such as blueberries, raspberries, redcurrants, blackberries and strawberries.

An outbreak of Hepatitis A in Italy, Denmark, Sweden, Norway and Finland has also been linked to the consumption of frozen fruit, but the strain of the virus in Scandinavia is different to that identified in Ireland and Italy.

FSAI chief executive Alan Reilly said boiling the berries for at least one minute before they are eaten will destroy the virus if it is present.

“Also we remind consumers to wash all fresh berries, and other fruit and vegetables if eating them uncooked,” he said.

“Food businesses must always ensure they source their ingredients from reputable suppliers with efficient and comprehensive traceability and food safety management systems.”

Mr Reilly said there was no evidence to suggest fresh Irish or fresh imported berries are implicated at this stage of their investigation.

Hepatitis A is an infectious disease of the liver which is usually contracted by ingesting contaminated food or water, or by person to person transmission.

A mild dose of Hepatitis A can last up to two weeks, but a more severe infection can last months. Symptoms include fever, loss of appetite, nausea, fatigue and abdominal pain, followed a few days later by jaundice. The severity of symptoms increases with age.

The incubation period from exposure to the onset of illness ranges from 15 to 50 days, the average being 28 days.

The FSAI investigation, which is being carried out in collaboration with the Health Protection Surveillance Centre, the Health Service Executive and the National Virus Reference Laboratory, is focusing on tracking and tracing foods consumed by those infected with the virus in an effort to identify the source.