Healthcare professionals may be compelled to have flu vaccine 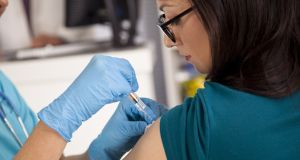 There is mounting concern at the highest echelons of the Department of Health that healthcare professionals are failing to avail of the flu vaccine in sufficient numbers. File photograph: Getty Images

A mandatory order requiring health professionals to have the flu vaccine is under consideration.

Minister for Health Simon Harris has said he will consider making it obligatory for healthcare professionals to have the anti-flu jab and that numbers availing of the vaccine has increased. But he added that the uptake was still too low.

“I am nowhere near satisfied that healthcare professionals, who know the danger of the flu, that their uptake rate is so low and so much lower than the population at large,” he said. “It deserves very serious consideration by me, I am not ruling it out. Mandatory vaccines is not straightforward; I prefer to do things collaboratively.”

Mr Harris said he would be reviewing all things associated with the flu with the Health Service Executive at winter’s end.

The Irish Nurses and Midwives Organisation (INMO) said it was opposed to the idea and it would be forced to challenge the human rights aspect of any such move.

“Any invasive procedure is a human rights issue and you would be opening up a can of worms,” deputy general secretary Dave Hughes told The Irish Times.

Nursing uptake of the seasonal flu vaccination has increased from as low as 30 per cent to about 50 per cent this year.

Mr Hughes said there were a number of successful campaigns that increased uptake, noting Beaumont and Temple Street hospitals in particular, but said there was still a reluctance.

“There is a scepticism that there is so many strains of flu, that you could get vaccinated and you still get the flu. That’s one of the risks this year,” he said.

Waiting numbers reached a record level of 677 at the beginning of the month, illustrating the growing strain on hospitals to process patients through to beds on admission.

On Friday, former president of the Irish Medical Organisation (IMO) Ray Walley said evidence in the UK was the flu would reach peak levels within a month.

He warned that HSE suggestions flu cases could reach their peak here sooner might dissuade people who had delayed getting the vaccine from doing so.

Dr Walley also called for a renewed emphasis on healthcare staff receiving the vaccine. The HSE has said most healthcare workers had not received it.

The IMO said it “supports” the vaccination programme, but on a voluntary basis.