Howlin recalls his Bill which brought down Haughey government in 1989 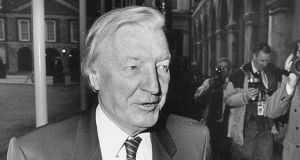 Charles Haughey: the haemophila debate brought down his government in 1989 and marked the end of Fianna Fáil-only administrations. Photograph: Frank Miller.


The 25th anniversary of one of the pivotal events of modern Irish politics – and a low point of the health system – was marked at a reception last night.

The event, the landmark Dáil debate on haemophilia and HIV which led to the 1989 general election, was recalled by members of the Irish Haemophilia Society.

In attendance was Minister for Public Expenditure Brendan Howlin, who moved the Private Member’s Bill calling for the setting up of a £400,000 trust fund for haemophiliacs who contracted HIV from infected blood products.

The defeat of Charles Haughey’s government on the issue led directly to a general election and the end of Fianna Fáil-only administrations.

A total of 106 people with haemophilia were infected in the 1980s through infected blood products supplied by the State. By 1989, four members of the society had died as the full impact of Aids was becoming apparent.

The society sought financial assistance from the government but none was forthcoming.

After three further deaths, Mr Howlin, then a backbench Labour TD, brought forward his Bill in the Dáil, which was voted upon on April 25th and 26th, 1989. The government lost the vote by 72 votes to 69, and Mr Haughey called a general election, in which he lost a significant number of seats.

Since then, 70 of the 106 people with haemophilia who contracted HIV have died, and a further 37 people who contracted hepatitis C also died from infected blood products supplied by the State.

Mr Howlin attributed the fall of the government to hubris on the part of Mr Haughey, who had just returned from a visit to Japan. He said the vote changed the course of political history, but it also showed the impact of effective advocacy.

Since then, the State had recognised the needs of other groups of hurt people, such as the Magdalene survivors. He expressed the hope that the needs of women with symphysiotomies would be dealt with speedily and readily.

“Our members vividly recall those difficult days. We will always remember those who have died,” the society’s chief executive Brian O’Mahony recalled.

“The burden of HIV and hepatitis C in our community, on our members, on families, on individuals and on their dependents has been immense.”