Good progress in Portlaoise, but what about accountability?

If lessons had been learned, other baby deaths might have been prevented 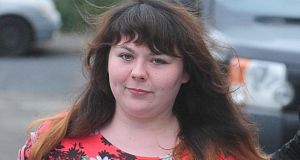 Shauna Keyes arrives at Portlaoise County Council buildings for the inquest in to the death of her baby son, Joshua, in September 2013. Photograph: James Flynn/APX

The latest report to be published into the tragic events at Portlaoise hospital raises two separate sets of issues; one relating to the care provided in the maternity unit and the other to the willingness of the health system to investigate mistakes.

The review of the death of baby Joshua Keyes-Cornally in 2009 treads familiar ground in relation to what went wrong. Staff didn’t spot the signs of foetal distress and, as a result, were too slow to switch to a Caesarean delivery. The unit lacked basic services, from blood monitoring equipment to bereavement counselling. There was an obvious lack of feeling and compassion in the way Shauna Keyes, Joshua’s 18- year-old mother, was treated.

The report only hints at the trauma Ms Keyes and her partner, Joseph Cornally, were forced to endure after losing their baby. The young couple were effectively left in the dark as to what happened; worse, unfounded suggestions were made that Joshua had Down syndrome or that what happened to him might have resulted from a heavy blow during pregnancy.

It took 2½ years for an initial report to be completed, and four years for an inquest to be held. Only a chance link-up with other bereaved parents in the midlands provided the catalyst for exposing the scandal in the maternity unit.

Today, the irony is that Portlaoise is one of the safest places in Ireland to have a baby, with some of the best staffing ratios and most modern equipment of any maternity unit.

Ms Keyes has personal experience of the improvements there, having successfully delivered a second child, Maisie Ann, in the hospital in December 2014.

Ms Keyes’s transformation from a vulnerable 18-year-old losing her first-born to an energetic patient advocate and hospital campaigner is one of the positive outcomes of this otherwise sorry tale.

Last year’s report by the Health Information and Quality Authority assigned responsibility for the failings of the hospital up the managerial chain. This prompted the HSE to promise another review, but again nothing has been heard of this since and no completion date is to hand.

The Prime Time programme on Portlaoise two years ago led to hundreds of women contacting a helpline with their concerns over maternity issues. Some 130 cases are under review and, we are told, the last of these will be completed next month.

We know little about this process. How many women have received a written systems analysis review, the “gold standard” of investigatory reports, as occurred in the case of baby Joshua? How many have been independently investigated? What further actions are being taken in individual cases? What new issues, if any, have these cases highlighted?

The Dublin Mid-Leinster Hospital Group, which has responsibility for these reviews, says it will eventually publish an overview. It can only be hoped this report will shed adequate light on what up to now has been a process lacking transparency and oversight.