Irish Lives: Former nun Anne Merriman was up for the Nobel prize for her hospice work 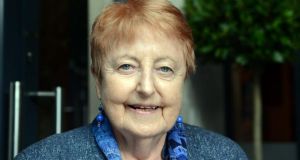 Anne Merriman looks at least 20 years younger than her actual age of 79, an impression reinforced because she also speaks with the passion and intensity of someone 40 years her junior.

She grew up in Liverpool, both her parents being English-born children of Irish emigrants.

As a young girl in a world that asked people to give pennies to “the black babies in Africa”, she became entranced both by that continent and by the nuns, an interest that saw her take holy orders with the Medical Missionaries of Mary and proceed post-haste to west Africa, with a UCD medical degree in her back pocket.

“My mother said that when I was four, I told her I was going out to Africa to look after the sick children,” she recalled this week during a chat in Dublin.

As a child she was inspired in part by a religious publication, Echo from Africa.

As a teenager, she recalls also seeing a film, The Visitation, which was produced in Dublin in 1948 by the Medical Missionaries and portrayed the founder, Mother Mary, going to Africa on a bicycle.

“I didn’t want to be a nun; I just wanted to get to Africa and here they were, riding bicycles and behaving like normal human beings, not like the nuns at school!”

Later in life, and unhappy with the demands of unquestioning obedience in the church, she left the Order after 20 years, most of them spent in west Africa, and returned to Liverpool where she became a proselytiser for palliative care – a passion that brought her to Ireland this week and also lay behind her nomination for yesterday’s Nobel Peace Prize – which in the event went to Pakistani and Indian child rights activists Malala Yousafzai and Kailash Satyarthi.

“Get real!” she shot back without a moment’s hesitation.

“I’d say to him, ‘Look, I’m a doctor, I’m a woman. If the medical fraternity said, ‘We’ll not have women doctors any more’ there’s be uproar in the world; there’d be a revolution.

“St Augustine is the one at fault; we’ve got to throw him out of the church.”

On the great issues being studied in Rome, she thinks some church teaching is “absolutely crazy” at times and she takes the liberal position on most.

Communion for those who divorce and re-marry?

“Of course; that should have been going on all the time.”

Abortion? Hard rules make for bad care, might be the best way to sum up her position.

“I was in general practice when it started in England and I saw some very sad things happening and, the thing was, we were kind of protected, because we could tell them, ‘I don’t agree with you having an abortion’, but I’d send them to another doctor where they could,” she said.

“You can’t make one law for everybody. They’re all individual cases.”

Merriman’s life calling grew into helping bring palliative care to the underprivileged. This, she feels, is serving God through helping people.

The value of hospice care became apparent to her when, returning to Liverpool from Nigeria, she went into geriatric medicine.

“I saw a lot of elderly people dying in a very bad way in Liverpool where there was no palliative care at all,” she says.

She invited her to Whiston Hospital to talk about palliative care. “She inspired everybody. There was a queue outside the door; they couldn’t all get in.”

A six-year stint followed at the community medicine department in the University of Singapore where she helped develop a method of administering palliative care through liquid morphine. . . and then, Africa called again and she has lived there for the past 20 years.

When she went to Kenya in 1990, HIV infection rates in neighbouring Uganda were up around 38 per cent. Now they are below 10 per cent. Then, the population was 19 million; now it is 38 million.

“The doctors [in Uganda, her home] talk as if everybody sees a doctor; they don’t!” she says.

“People are lying, rotting, dying of cancer and Aids and screaming and the families are terribly distressed in the villages and it’s really terrible.”

Despite that, the delivery of palliative care is improving, she says. Where before, a terminally ill patient was left essentially to bear their burden unaided, Kampala has a liquid morphine producing facility and end-of-life pain can be controlled “but in the rest of the country most aren’t getting it but we are moving”.

Much of her focus now is on bringing the benefits of palliative care to the widest attention across sub-Saharan Africa. In part, this involves changing attitudes – “the culture is against doctors making home visits” – and fighting bureaucracy.

“We have an ethos which says bureaucracy has no place in palliative care because it just interrupts what you see is necessary for the patient.”

To that end, her organisation in Kampala, Hospice Africa Uganda and Makerere University, offer a degree programme in palliative care for students from all over the continent. Today in Dublin, the Irish Hospice Foundation is announcing a €10,000 scholarship, in her name, to the course. It will be awarded every two years to a student nominated by Hospice Africa Uganda and will enable the funded student to complete a BSc in Palliative Care.

“Last year, we had 120 [applications] but we could only take 90 of those because we couldn’t find the money [for them] to come,” she says.

“Do you know any millionaires who could help?” she asks only half joking. See hospiceafrica.ie