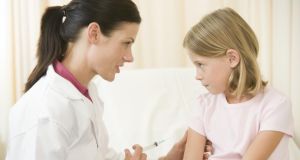 Free GP care for children: the introduction of the new arrangements will cost close to €90 million annually.

The Government’s long- planned scheme for free GP care for children aged under six is to come into effect in July after a deal was agreed with doctors’ representatives.

About 270,000 children stand to benefit from the agreement between the Government and the Irish Medical Organisation (IMO).

The scheme will provide for a new “cycle of care” for children with asthma. This will involve structured visits, education of children and parents, medicine and inhaler technique reviews and an individualised asthma plan for parents.

All children will receive two “wellness” checks, at ages two and five, to monitor height and weight.

For existing medical card and GP-visit card patients who have type 2 diabetes, the new scheme provides for the introduction of a “cycle of care” involving two annual consultations.

The introduction of the new arrangements will cost close to €90 million annually.

The IMO has backed the new deal, but it will be up to each individual GP to decide on whether to participate in it.

Minister of State at the Department of Health Kathleen Lynch said the Government would be looking for 80 per cent of family doctors to participate but would be hopeful 100 per cent would do so.

In cases where a GP did not sign up to providing free care for children under six, parents would have to find a doctor who was in the system in order to get the free services.

The introduction of free GP care was a key element of the Government’s overall health reforms. Originally it had planned to introduce GP care without fees for the whole population in the lifetime of the Government but this has been delayed. Talks on the plan have been under way for a number of years.

GPs will be paid a capitation fee of €125 a year for each child under the new scheme. The IMO said this was 82 per cent more than the existing rate.

However, it told members in an internal message the fee per patient amounted to €216 when additional payments such as practice supports, medical indemnity, special items of service, pension and special type consultations were taken into account.

Minister for Health Leo Varadkar said the agreement represented “a major step forward in improving access, quality and affordability of healthcare in Ireland. It also marks the most tangible step forward so far along the road to universal healthcare.”

“From this summer, up to 300,000 children and senior citizens who currently have to pay to see their GP will no longer have to. This will mean real savings for pensioners and families.

“But it is about much more than that. The new enhanced service covers all children under six, including those who have medical cards already. They will benefit from management of asthma in general practice and preventative wellness checks.

“Adults of all ages will benefit from the new diabetes programme, meaning they will have their condition managed by the GP who knows them, rather than in the hospital clinic.”

IMO GP committee chairman Dr Ray Walley said: “We have stopped the cycle of cutbacks and begun the process of bringing new investment into general practice. We have more to achieve but we believe this is significant first step.”