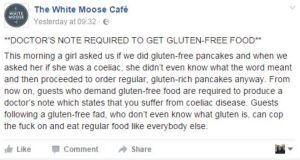 A Dublin cafe-owner has angered coeliacs across the world by suggesting customers should have to show medical proof of the condition before they are served gluten-free food.

The suggestion is just the latest pitch for publicity by Paul Stenson of the White Moose Café in Phibsborough, who has featured in a number of controversies in recent years over his aggressive marketing style.

“From now on, guests who demand gluten-free food are required to produce a doctor’s note which states that you suffer from coeliac disease,” Mr Stenson said in a post on the cafe’s Facebook page. Customers following a “gluten-free fad, who don’t know what gluten is” should “cop on and eat regular food like everyone else”.

His comments incensed coeliacs and others with diet-related disorders across the globe, as far away as Australia.

One said his wife is a coeliac and the comments are extremely upsetting: “Insisting they must carry proof of their illness is disgusting. You need to be reported to the food safety authority.”

Mr Stenson replied: “You’re upset? Hang on. My violin is around here somewhere.”

He gave an inkling of his motivation when one poster accused the cafe of “trying to get free advertising again”. Mr Stenson replied: “Trying???”

Contacted about his proposal and his rude putdowns of critical online comments, Mr Stenson said it was “all just a bit on fun” and he had no intention of asking customers buying gluten-free produce to prove they were coeliacs.

He described his abuse of posters, some of whom he called “whinge-bags” and “a**eholes”, as tongue-in-cheek. “If people want to take offence and whinge and moan, then they’re probably not the kind we want in our cafe anyway.”

Asked if it was a publicity stunt, he said his aim was to get as many eyes reading about his cafe as possible.

“Facebook is advertising for free,” he said, claiming the page had been seen by 1.9 million people worldwide.

Mr Stenson has previously provoked controversy by threatening to “shoot” vegans and suggesting people not willing to pay inflated rates for a hotel during the high season should stay in a homeless hostel or dog kennel.

1 All students will not return to school even if social distancing rules are relaxed – McHugh
2 Emily Maitlis thanks BBC viewers for support after Cummings row
3 ‘Stick to the guidelines’ – People warned not to gather in crowds as sunny weekend approaches
4 Church closes its doors after flouting public health rules
5 The human cost of Covid-19: Ireland's care homes with the most deaths revealed
Real news has value SUBSCRIBE